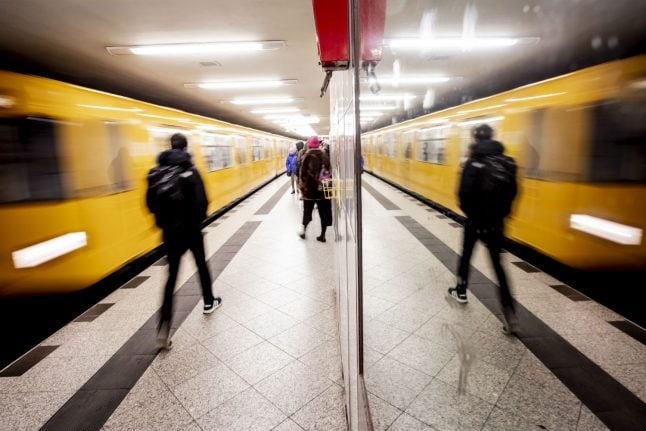 Authorities discovered a corner office (or Büro in German) space equipped with computers and printer, books and pen, a switched-on desk lamp, a mini-cupboard and houseplant.

The find comes four years after BVG security forces stumbled upon an entire bedroom within one of the U9 line stations.

Therefore “I thought I was crazy,” a Berlin Transport Authority (BVG) security man told the local Berliner Kurier newspaper when he found the functional space.

“That's Berlin!,” wrote a Twitter user in the local dialect about the discovery.

But the BVG is not amused.

“We are now having the stuff put away and are filing a complaint,” spokesman Jannes Schwentu told the Kurier, adding that the office was likewise set up as an art installation by unknown artists.

“Someone has apparently moved in areas where he should not have moved. It's dangerous, if only because of the high voltage.”

The office is likely to be relatively new, he added, “because it quickly gets dusty and dirty down there – also because the room was installed under a ventilation grille.”

No doors to electricity systems were broken into or damaged, reported the Kurier. Rather, the artists apparently tapped electricity from a nearby water pump to operate the mounted desk lamp.

They set-up also carries a political message, reported Berlin's Tagesspiegel. On the office wall is a map of Berlin, a cross and a poster of Jan-Marco Luczak, a CDU member of parliament.

His photo is above the slogan “Complain against the Mietendeckel (rent cap)” – with the “against” crossed out in red to take a jab at the CDU's opposition to Berlin's planned rent cap.

'Playing a joke on us'

In 2016, action artists, later revealed to be the group “Rocco and His Brothers”, set up a living room in an U-Bahn shaft – including a bed, TV, palm tree, lamp and chequered wallpaper.

The men reportedly furnished the room with the help of BVG warning vests they had printed themselves.

“Somebody's been playing a joke on us. Somehow they managed to smuggle the furniture through the security gates,” said BVG spokeswoman Petra Nelken at the time.

Such a facility is particularly problematic for underground security, because the furniture, according to Nelken, blocked escape routes.

How could the artists once again manage to furnish a complete room? An insider told the Kurier that the shafts are not checked regularly.