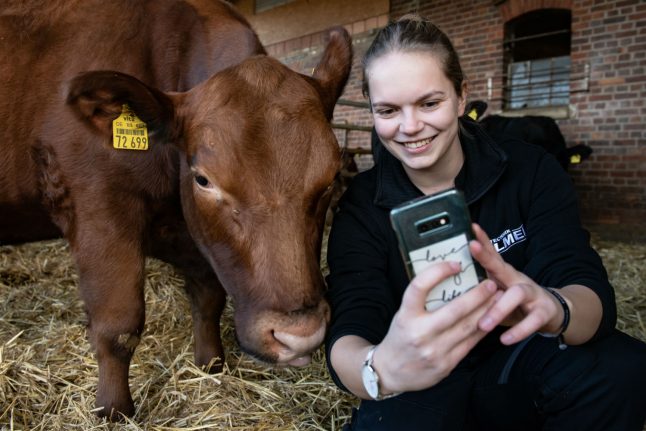 Country life is not dull and boring, it’s cool: that’s what the Deichdeern (waterway lass) from North Friesland and the Bauernbengel (farmer's rascal) from southern Lower Saxony want to show the world.

“I want to show people that life here is worth living,” said Julia Nissen, who blogs from Bargum near the Danish border as Deichdeern.

Only 23 percent of Germans live outside of cities or metropolitan areas and the migration gap between the countryside and cities is stark, particularly amongst young people.

Between 2008 and 2014, 6.9 million people between the ages of 18 and 29 migrated within Germany. Only 19 percent of these young people moved to a rural area, while the other 81 percent opted for a city.

Nissen gives craft tips, tells people that they should imagine a feed mixer to be an XXL thermal blender, as well as explaining how farmers can use a “Tinder for cattle” app to find the right sperm donors for their cows.

In September, the 32-year-old also started a tractor sharing agency. The idea came from her three-year-old son, who asked her why children are not allowed to drive tractors. Since then it has brought together over 300 young families with the hashtag #BlablaTractor.

Having been inundated with inquiries, the mother of two is now expanding the idea into an “app for the countryside” with start-up capital raised via crowdfunding.

“It should become a platform for rural experiences between private individuals,” says the agricultural scientist. Nissen not only wants to use the app to arrange tractor rides, but also to set up cooking sessions with country women or meetings between hunters or anglers.

The target group of the  Deichdeern are women between 25 and 40 yearning for a countryside life, as half of their followers come from the city.

“I almost only reach farmers and, unfortunately, almost only men,” said the 25-year-old Ann-Christin Kahler.

Life as a 'manure princess'

She started to post videos and photos around five years as Gülleprinzessin (Manure Princess) – her nickname during her vocational training. The young woman shows people the water buffalo on her parents' farm in Rosenthal-Roda in Hesse, or how she drives a combine harvester in a neighbouring farm in her hometown of Kalefeld. Over 41,000 people follow her on Instagram.

The employee of an agricultural machinery company get lots of requests for advertising or appearances.  “But I also reject a lot,” she says. She didn’t want to advertise organic tampons or to participate in a television documentary.

After posting about slaughtering or spraying agents, she also received hate comments, reports Kahler. “In these instances I try to explain, remain factual and, if necessary, block people.”

Malte Messerschmidt from Eimen near Einbeck, who presents himself as “bauern_bengel” (farmer’s rascal) on Instagram, also wants to clarify.

“I want to show people what really goes on in our world. I don't go spraying chemicals at night because I have something to hide, but because that’s when the agents work best” says the 21-year-old, who studies in Göttingen and wants to take over the family farm.

He also keeps his neighbours informed with a WhatsApp group, for example before it gets dusty when threshing.

The importance of social media in the industry has increased because people today want to know exactly: “How are foods made? What is behind my pork chop?” says Thomas Fabry, who offers social media seminars for the industry. According to his studies, many consumers want to support regional farmers, but do not know how.

Some are suspicious because they have seen pictures of abuses in stables secretly taken by animal rights activists, says the 26-year-old from Korbach in Hesse. “Then they think that's how it looks in every barn.”