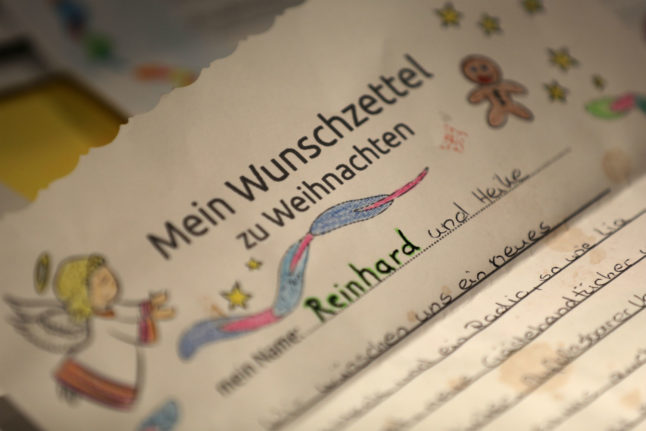 The oldest wish lists found in Germany date back to the first quarter of the 18th century. Early Christmas wish lists were not actually requests for what children wanted for Christmas.

Instead, they were letters of gratitude from children addressed to the adults in their lives. This was an especially popular practice among the Protestant North-German upper class. Wish lists are sorted at one of Santa's addresses in Germany. Photo: DPA.

Over time, department stores and toy companies realized the power of the wish list as a marketing tool and simplified the process for children by producing lists of available products whereby children simply had to check off what they wanted for Christmas.

Still, during war times, many children added a request for peace to their wishes, as well as dolls, toy soldiers, and other popular items. Today, children around the world carry on the tradition of writing a letter to Santa (or the Christkind) to say what they want for Christmas. In Germany, he answers.

Where do children send them?

In 1984, two children from Berlin and one from Saxony wrote letters to addressed to Santa Claus in Himmelpfort, a Lower Saxon town which translates to “Heaven’s gate.” The letters were answered by some kind postal workers who didn’t want to send them back without an answer. Today, the Deutsche Post has seven locations across Germany where children can send letters to Der Christkind, St. Nikolas, or Der Weihnachtsmann (Santa Claus). They are guaranteed an answer as long as the letter arrives by the third Sunday in Advent (December 13th in 2020).

The Deutsche Post has since found some additional helpers for Santa to make sure that all the children get an answer. Last year, Santa and 20 helpers responded to over 250,000 thousand letters from 64 countries.

If you’d like to send a wish list to Santa Claus, use this address: An den Weihnachtsmann, Weihnachtspost, 16798, Himmelpfort, Deutschland.

I think it’s wonderful that children can send wish lists to Himmelpfort and get answers back.