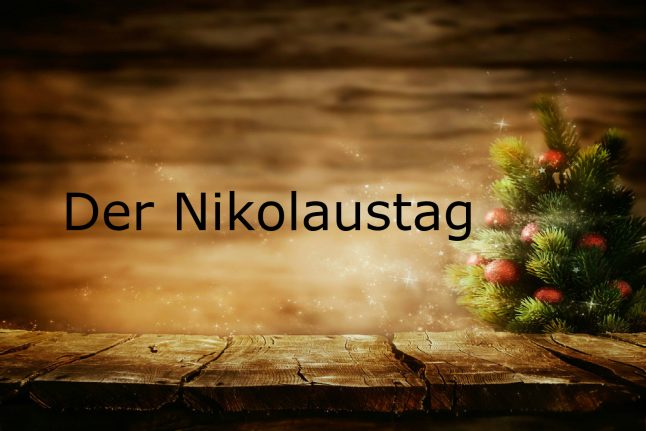 Saint Nicholas Day is one of those events that children love and look forward to celebrating. There’s nothing better than waking up, running to your shoes, and finding them filled to the brim with delicious sweets. A Nicholas stocking filled with sweets and decorated with a fir branch. Photo: DPA

December 6th is “Nikolaustag” (Nicholas day). On the night of December 5th, Saint Nicholas leaves sweets and sometimes presents for the children.

What is the history behind this day?

In 325 AD, Nicholas was appointed bischof of Myra at the age of 19. His deeds as a bishop were honourable, compassionate and altruistic. For example, he donated his entire heritage to the poor.

Saint Nikolaus died on December 6th. Since then, this day serves as a commemoration of him and his selfless deeds.

What do the stories say about Saint Nicholas?

Apart from the actual history of this man, there are many stories, myths and legends of Saint Nicholas.

One of these stories is about a poor man, who wanted to prostituted his daughter so that he could pay for their wedding.

But when Nicholas caught word of this, he threw gold into their chimney (another version says through the window) which fell into their socks that were hanging there to dry. His gesture saved the girls from their fate.

Saint Nicholas represents a charitable man who gives to the needy, especially to children. He is renown for presenting children with sweets from his Nicholas bag that he carries over his shoulder.

But, myths also say that he was accompanied by “Knecht Ruprecht” (Servent Ruprecht), who punished those who did not behave honourably with his “Rute” (rod).

How is this day celebrated in Germany?

Due to the stories about Saint Nicholas, people celebrate this day by presenting their children with gifts in their shoes (and sometimes stockings).

The night before the 6th, you clean and polish your shoes, and then set them out for Saint Nikolaus to fill.

Hopefully, the next morning, you will find them overflowing with lots of treats such as marzipan, gingerbread, mandarins and nuts.

But this only applies to well-behaved children. Those who acted naughty throughout the year, might find a piece of wood or coal in their shoes, as a reminder to behave better next year.

All throughout the advent time, Germans sing Christmas songs, and many of these revolve around Saint Nicholas and Knecht Ruprecht.

Often in younger grades, classes will learn about Saint Nicholas and sing these songs. Many teachers will even present the class with sweets from Saint Nicholas.

“Tomorrow is Nicholas day. Have you cleaned your shoes already?”

“What did you get from Nicholas yesterday?”

“A lot of sweets. Especially marzipan and nougat. But also walnuts that I still need to crack.”