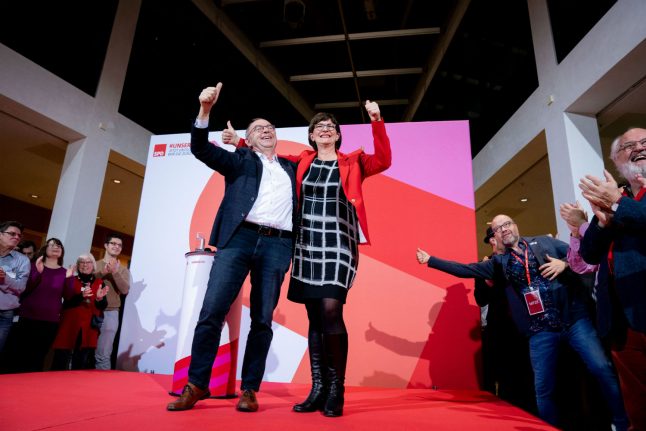 The new leaders of the SPD, Norbert Walter-Borjans and Saskia Esken, following their election on Saturday. Photo: DPA

As SPD members gather to discuss their demands for keeping the coalition afloat, here's a look at four possible scenarios for the months ahead.

But the pair have stopped short of calling for a vote on whether to stay in the loveless marriage at the December 6-8th congress.

Instead, they want to tweak the hard-fought coalition agreement struck with Merkel's centre-right CDU and its Bavarian CSU sister party after 2017's inconclusive general elections.

The duo are expected to ask SPD members to back a slew of new demands, including a higher minimum wage, more investment in Germany's crumbling infrastructure and more ambitious climate policies.

The other two coalition parties have ruled out renegotiating the coalition accord.

But Merkel's spokesman has said the veteran chancellor is “open to talks”.

If a compromise is struck and the SPD secures some concessions, the GroKo could survive until Germany's next election in 2021 — allowing Merkel to complete her fourth and final term as planned.

This scenario is seen as most likely by observers as it would also allow the SPD, weakened by a series of poll setbacks, to sharpen its profile under the new leaders before facing voters again. The new leaders of the SPD, Norbert Walter-Borjans and Saskia Esken, in September. Photo: DPA

If it fails to push through its demands, the SPD could pull the plug on the partnership with the CDU/CSU, triggering the coalition's collapse.

Merkel, keen to shape her own political exit after 14 years in power, could then try to head a minority government — a first in postwar Germany.

Merkel has in the past said she was “very sceptical” about leading a government without a stable parliamentary majority, but observers say the prospect may be less daunting now.

Her cabinet has already approved a budget for 2020, and Merkel's favoured successor Annegret Kramp-Karrenbauer could earn her stripes by assuming the
role of deputy chancellor.

Merkel herself would be able to stay on and captain Germany's six-month presidency of the EU Council from July 2020.

After that, new elections would be just around the corner anyway.

Several senior CDU figures have voiced their preference for this scenario, including Merkel critic Friedrich Merz, who said the “experimental nature” of a minority government “has its charms”.

If the SPD walks away, Merkel's CDU/CSU alliance could try to woo the liberal FDP and the left-leaning Greens into a tie-up nicknamed “Jamaica” — because the parties' colours match those of the Caribbean country's flag.

A 2017 attempt at such an alliance broke down when the FDP abruptly quit talks, but the party has signalled it would be ready to play ball now.

The Greens, however, have less incentive these days to join in as junior coalition partner.

Spurred by growing concern about climate change, they have surged in the polls and are poised to become Germany's second-largest party in the next elections — putting even the chancellery within reach. Snap elections are seen as the least likely outcome by local media — but they also wrongly predicted that the SPD would choose another, more moderate leadership duo last month.

The move would require Merkel to call, and lose, a confidence vote in the Bundestag lower house of parliament.

Attention would then shift to President Frank-Walter Steinmeier, who would embark on complex negotiations to try to cobble together another coalition.

If that failed, he would dissolve parliament and fresh elections would follow within 60 days.

Voters could well punish the SPD and the CDU for sending them to the polls early, while the far-right AfD and the Greens stand to make gains.

READ ALSO: 'Surfing the Zeitgeist': How the Greens have won over Germany

Although snap polls are rare in Germany, Der Spiegel weekly said it was “nonsense” to fear them.

“Instead of Merkel's eternal end phase, a fresh start could be possible,” it wrote.