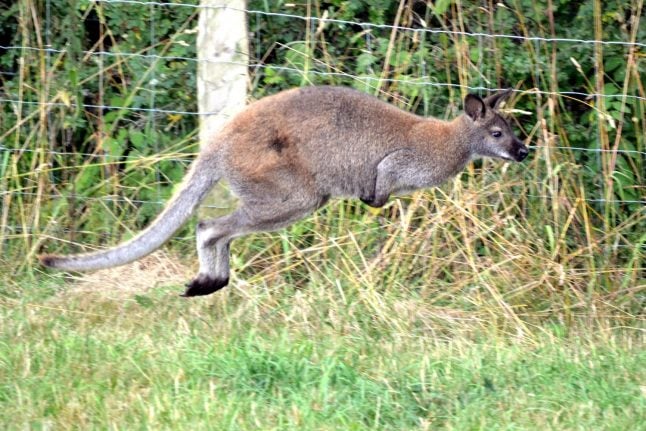 The kangaroo 'Skippy' spotted in Hesse after escaping. Photo: DPA

The kangaroo's owner confirmed to Bavarian broadcaster BR24 that the animal had left its enclosure in Untertraubenbach, a small village near the Czech border, earlier this week.

Last weekend another one of his kangaroos escaped the enclosure, but was caught with the help of several villagers.

In the latest incident, the animal, which is normally calm, broke out of its corral fence and hopped away, the owner said.

The kangaroo has been spotted several times in the village in the last few days, but has not yet been caught.

The owner, who has kept kangaroos as pets over the past several years, said the animals are able to withstand the current sub-zero temperatures.

It's not the first time pet kangaroos have escaped their owners in Germany.

In the summer of 2005, the kangaroo “Skippy” hopped all over the Sauerland region – until it was finally stopped by a pasture fence at Diemelsee in northern Hesse.

Kangaroos are indigenous to Australia, and are known for their ability to live in a variety of different natural environments.

Exotic animals as pets in Germany

It is not uncommon for those in Bavaria and throughout Germany to keep exotic animals as pets, whether Koi fish imported from Japan or emus.

In a study carried out between 2010 and 2015, the German Society for Nature Conservation Conservation (Naturschutzverband) found that a total of 10,000 exotic mammals were offered for sale in Germany.

It is unclear how many exotic animals are kept as pets in Germany. Sometimes specific species are allowed in some states, but forbidden in others.

For example, it is legal to keep a jaguar as a pet in Baden-Württemberg, but forbidden in Berlin and Hesse. Under some circumstances it is also allowed in Bavaria.

However keeping exotic animals as pets has often been criticized by animal experts.

“Native animals such as squirrels may not be caught and kept as pets,” biologist Sandra Altherr from the environmental organization told Die Welt.

“But we still import animals from other countries from the wild, so that we can make our living rooms prettier.”