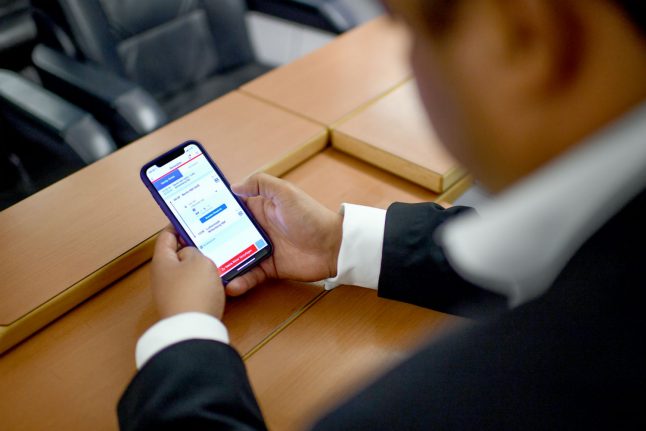 A man in Berlin uses DB Navigator to buy a ticket on his smartphone. Photo: DPA

This summer has brought a range of weather – from torrential rain to humid heat – and often in the same afternoon. “Weather is everywhere here. If you are not prepared, you suffer,” said Pavan in Duisberg.

Not only does the convenient app break down daily temperatures, it also gives minute-by-minute hyperlocal forecasts of when a storm will hit – giving you enough time to seek cover.

Despite a push to increase the number of on-time trains in Germany, Deutsche Bahn gets a bad rap for being late. At least Germany’s railways have an app to notify passengers if their train is on time, and book transport tickets in the meantime. Unlike most other German public transport apps, there’s also an option to use it in English. Deliveroo closed its doors in Germany earlier in August, giving Lieferando (formerly Lieferheld) a monopoly on the home delivery market in Germany. That said, our readers praised its quick service and broad selection of food, especially after-hours when stores are closed.

“It’s the easiest app to order food at home when the market closes at 8 p.m. and you are lazy and hungry,” said Panshul in Munich.

From the tram system across much of east Germany, to the double-decker busses in some cities in the west, public transport systems vary widely around Germany.

This can be quite confusing if you’re in a new city or looking to travel to one. This is where readers said Offi comes in handy: not only does it help you get from point A to point B, but offers alternative connections if yours is running late or if you’ve missed it.

“This is the best app for public transport. Not only is it essential in Germany but in other cities or countries as well, though Germany is best covered,” said Chenbo in Dresden.

There are a lot of online German dictionaries, but readers such as Silviu from Munich preferred dict.cc as it provides example phrases for the selected word. It also translates from a wide variety of languages, from English to Finnish, and includes many colloquialism expressions left out of other dictionaries.

Whether you’re on the search for a new laptop or pair of skis, this comprehensive online coupon app was recommended by Local readers and bargain hunters. “It’s a very useful app to find good online shopping deals,” said Yuvaraj in Stuttgart.

Other readers recommended this shopping companion app, which helps locate the best deals and tells you if you’re getting ripped off or not. “You can check the prices of various articles and even scan a barcode to see if you are getting a good deal,” said Emil in Hanover. The messaging app has been and continues to be a core way Germans communicate, whether through individual chats or catered groups. “I use it to manage communications with different groups: family abroad, colleagues, my food group, my book club, and my yoga class,” said Ming near Frankfurt.

Many readers pointed to Deepl as the best online translator, even giving the option to select a different word when you aren’t satisfied with the the current version. However, as Deepl doesn’t yet have an app, some readers pointed to “the next best” thing: Google Translate, which also has some savvy features such as automatic text translation and the ability to translate text offline.

Whether you’re on the look out for love or just making new contacts in a foreign city, readers recommended this dating app. “I haven’t found anything serious, but made some friends and a connection who led me to a job,” said Emily in Berlin.

But if you’re not a fan of continually swiping left or right, there are other apps with a large base of both German and international users like okcupid, Happn, and Bumble, which is also marketed as a friendship and networking app if you prefer searching for your next job rather than date.

And of course The Local's app

You can get all the news, features and information on Germany direct to your mobile phone by downloading our app, which is available for both Apple and Android phones. It just takes a few seconds.

“My favourite source of news.”

“The Local should be your daily morning read”.

“The best app to get updated on European news.”