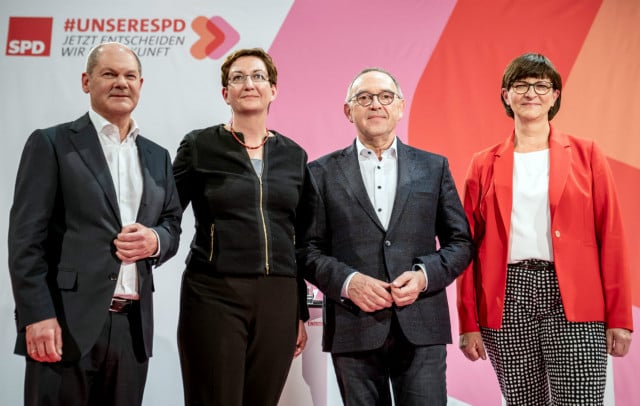 Olaf Scholz and Klara Geywitz stand next to Norbert Walter-Borjans and Saskia Esken after a live stream debate for the SPD leadership race. Photo: DPA

The two pairs in the running – each composed of a man and a woman– will share the leadership of the SPD.

Politically on the centre and left of the party, they could help determine the future of the current governing coalition which is due to end in 2021.

In the latest opinion polls, the party which came second in the 2017 federal election is currently vying for third place with the far-right AfD, behind Chancellor Angela Merkel's CDU and the Greens.

Here are the profiles of the four candidates. Political scientist Geywitz was relatively unknown in Germany until just a few months ago but the 43-year-old is now in pole position to take over – along with Finance Minister Olaf Scholz.

The pair came first in an initial round of voting, although only by a narrow margin, against the more left-wing Norbert Walter-Borjans and Saskia Esken.

Long-time SPD member Geywitz is an experienced politician from Brandenburg, a region of former East Germany that includes the capital Berlin.

She was also involved in negotiations that led to the current governing coalition with the CDU and its Bavarian CSU sister party following an inconclusive election in 2017.

She is known for her biting irony. On the campaign trail, she has fought off suggestions that she is a token candidate alongside Scholz.

The 61-year-old Finance Minister and Deputy Chancellor–- a moderate centrist – is a party heavyweight.

But he is divisive within the party, which is split between those for and against the current coalition agreement with Merkel's CDU.

Scholz says this coalition “should be the last” but his willingness to stay in government has proved controversial – particularly as support for the party has plunged in a series of regional elections.

Like his conservative predecessor as finance minister, Wolfgang Schäuble, he is attached to budget discipline and the self-imposed zero deficit rule.

Born in Osnabrück, Scholz joined the SPD when he was 17 and flirted with the far left of the party in his youth. He was first elected to parliament in 1998.

During his stint as SPD general secretary between 2002 and 2004, he was forced to defend chancellor Gerhard Schröder's unpopular economically liberal reforms.

This earned him the nickname “Scholzomat” for his robotic public appearances.

A former finance minister for the North Rhine-Westphalia region, Walter-Borjans is referred to in German media by the nickname “Nowabob”.

The 67-year-old is also often referred to as the “Robin Hood of taxpayers” for a spectacular move against tax evasion.

In 2011, he arranged the purchase of data on German tax evaders in Switzerland. The repatriation of their assets swelled government coffers by billions.

Walter-Borjans started out in politics in 1984 and quickly rose through the ranks of regional government.

Between 2010 and 2017, he served as the region's finance minister with the support of the party's more leftist youth wing.

He has said he is a “staunch social democrat” but has not openly called for an end to the coalition. Esken, 58, is best known for her campaigns in favour of equal opportunities and digital access and against the far right.

She was first elected to parliament in 2013 and is on the left of the party. She favours state intervention in the fight against climate change.

Born in Stuttgart, Esken joined the SPD in 1990 and held various roles in the regional administration of Baden Württemberg.

In 2009, she set up an “Alliance Against the Right” in the town of Calw, where the neo-Nazi NPD was planning to set up its regional headquarters.

She has been critical of the coalition and its “politics of small steps” but has also not openly called for the SPD to pull out of it.