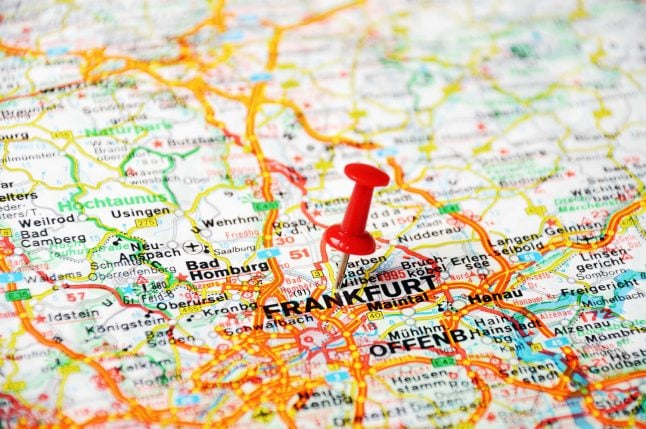 Frankfurt is the most populous city in Hesse. Depositphotos/ivosar

A strong economy, lots of deciduous forests, plus a happy population? Here are a few maps that explain why this central German state is doing so well.

The state of Hesse, or the Land Hessen, is located in central western Germany. It is bordered by the German states of Lower Saxony, Thuringia, Bavaria, Baden-Württemberg, Rhineland-Palatinate and North Rhine-Westphalia.

The capital of the Bundesland is Wiesbaden and the most populous city is Frankfurt am Main. The state of Hesse was created in 1946 following World War II by US military forces. First dubbed Greater Hesse, the state was formed by combining parts of the the Grant Duchy of Hesse (Upper Hesse and Starkenburg), as well as the Prussian provinces of Hesse and Nassau. In the map above, Hesse forms the northernmost part of the US occupation zone marked with yellow.

Frankfurt and Darmstadt were weighed as options to be the new capital, but both cities were extensively damaged from the war. In Frankfurt alone, around 5,500 civilians lost their lives and about 12,000 tons of explosives were dropped on the city.

In the spring of 1944, British forces had also obliterated Frankfurt's medieval city centre. Ultimately Wiesbaden, which also lies in the southern part of the state near Darmstadt and Frankfurt, and which had received much less damage, was chosen as the state's capital.

Despite its large metropolitan area in the south, Hesse is Germany's greenest state, with 42 percent of its land covered by forest. The state also encompasses part of Germany's Mittelgebirge, or Central Mountain Region. The largest rivers running through the state are the Fulda and Eder in the north, and the Rhine and Main in the south.

Hesse, along with Bavaria and Baden-Württemberg, is one of the western German states with the strongest economies. According to Eurostat, the GDP per capita, adjusted to eliminate price differences across borders, reached €41,300 in 2017, which was 13 percentage points above the German average of €36,400.

Frankfurt am Main, the home of the European Central Bank and the Deutsche Bank, is the financial capital of Germany and one of the most important cities internationally for its financial sector.

READ ALSO: 10 facts you probably didn't know about Frankfurt (even if you live there) Frankfurt is the backbone of the Rhine-Main Metropolitan area, which, with almost six million inhabitants, is the second largest metropolitan region after the Rhine-Ruhr area in North Rhine-Westphalia.

The region extends into parts of Bavaria and Rhineland Palatinate, but the bulk of the population resides within the bounds of Hesse.

According to the Deutsche Post's “Happiness Atlas” project, Hesse is the second-happiest state in all of Germany, losing only to Schleswig-Holstein in the far north. With a combined rating of 7.31 out of 10, Hesse's happiness is far above the 6.76 out of 10 reported in Brandenburg, which has the lowest rating in all of Germany.

In June of this year, refugee-friendly politician Walter Lübcke was shot and killed in his home in Kassel by a known right-wing extremist. This led to peaceful city-wide demonstrations against the rise of right-wing violence.

Despite this highly-publicized crime, the number of politically motivated acts of right-wing violence in Hesse are low when compared to other states, especially in East Germany The state of Hesse, along with other Western German states like North Rhine-Westphalia and Bavaria, took in large numbers of refugees in 2015.

Frankfurt is also one of the most diverse cities in the country, with over half of its inhabitants having an immigration background, according to city statistics.