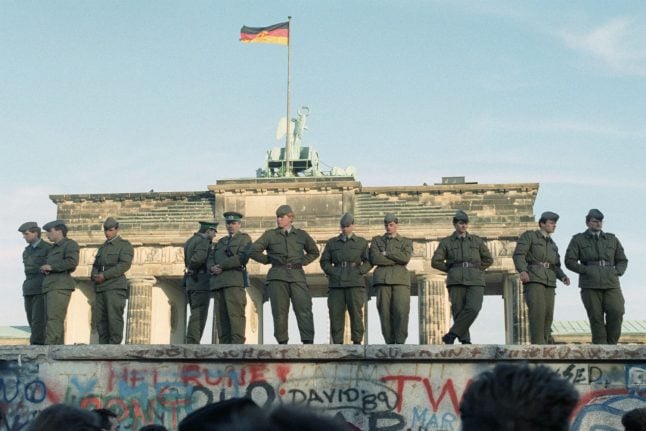 Soldiers stand on the West Berlin side of the Wall at Brandenburg Gate two days after its opening on November 11, 1989. Photo: DPA

For nearly three decades the forbidding Berlin Wall separated East and West, becoming the emblem of the post-World War II split of Europe into Soviet and Western spheres. Here is what you need to know.

155 km of concrete and wire The foundations of the Berlin Wall are laid out on August 18, 1961. Photo: DPA

The Soviet-allied East German authorities built the Berlin Wall from August 1961 to stop a flood of defections to the democratic West through the city.

The 155-kilometre barrier essentially surrounded West Berlin, which was an enclave within East Germany. The portion that split Berlin from north to south was 43km long.

Concrete panels 3.6 metres high made up 106 km of the wall; the rest was composed of barbed wire. Thousands of soldiers stand in front of the Berlin Wall after its opening on November 9th, 1989. Photo: DPA

A heavily guarded no-man's land known as the “death strip” ran along the
Eastern side of the Wall.

More than 7,000 East German soldiers manned 302 watchtowers and 20 bunkers. At night, with lamp posts every 30 metres, it was the best-lit part of Berlin.

West Berlin was seen as an island in a red sea of communism. As the map below shows, the wall divided the city but also travelled round West Berlin which was on the border to Brandenburg in East Germany.

The Wall cut across streets and squares. In urban districts such as Kreuzberg, the Wall ran directly on the streets or along rows of houses.

It also stood directly behind the Reichstag and then went in an arc around the Brandenburg Gate, which was marooned in the middle of no-man’s land.

Waterways such as the River Spree were off limits because they also belonged to the territory of the GDR. Today Checkpoint Charlie is a large tourist stop, in which visitors – like these two British tourists – have the chance to pose with “guards”. Photo: DPA

The Wall had seven official crossing points, the most famous being Checkpoint C, called Checkpoint Charlie by Western troops.

It was located in the heart of Berlin in a sector secured by American
troops.

In a high-stakes standoff at the checkpoint in October 1961, the US and Soviet militaries stared each other down for several hours in a dispute over an attempt by US diplomat Allan Lightner to visit East Berlin.

A year later East border guards at the checkpoint shot 18-year-old Peter Fechter as he was trying to flee to the West. He was left to bleed to death under the barbed wire, in view of onlookers and journalists. The bust of the GDR border guard Egon Schultz, who was accidentally shot by another GDR border guard in Tunnel 57 during an exchange of fire with escape helpers, lies on a shelf at the Berlin Wall Foundation. Photo: DPA

About 140 people died attempting to make the crossing between 1961 and 1989, according to the Berlin Wall Memorial.

The most successful escape route was Tunnel 57, dug by students from the
West from the basement of a disused bakery into the East. In October 1964, 57 East Germans used the 140-metre tunnel to defect.

One of the more extraordinary escapes came in August 1988 when a family of
four made it over the Wall aboard a small crop-duster plane.

Electronics engineer Winfried Freudenberg was the last to die, crashing in March 1989 in West Berlin having made it over using a self-built inflatable balloon. US President John F. Kennedy's stirring declaration, “I am a Berliner,” issued just metres from the barrier in 1963, has become its most celebrated condemnation in a message of solidarity with the East Germans.

In another famous speech by a US president at the Brandenburg Gate, Ronald
Reagan challenged Soviet leader Mikhail Gorbachev in 1987 to “tear down this
wall!”.

Over the next days euphoric Berliners perched on the wall and used pickaxes
and hammers to knock out chunks. Its systematic demolition followed, with just
sections remaining today as historical monuments. 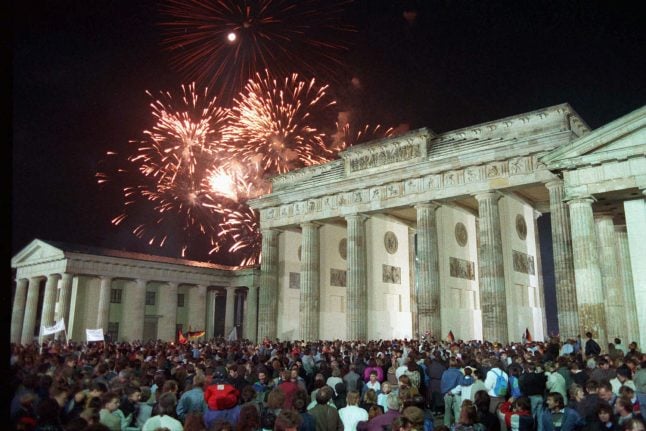