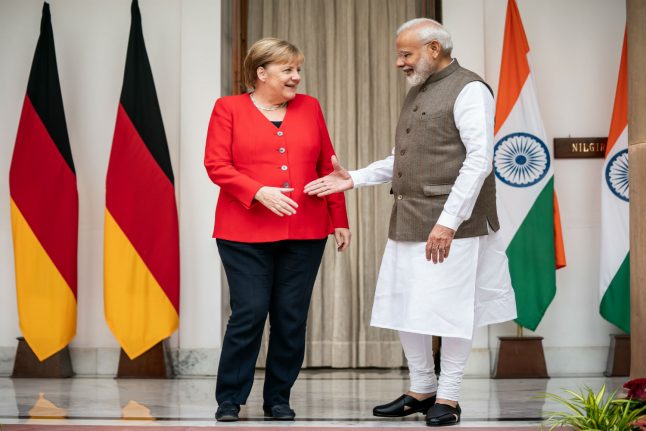 Ignoring medical advice to the choking megacity's 20 million inhabitants, Merkel and Modi reviewed a guard of honour at the presidential palace without pollution masks.

On Thursday evening, air quality was rated as “severe plus” by the Central Pollution Control Board.

As was the case with similar ceremonies following health concerns earlier this year, Merkel, 65, sat for the national anthems. The EU's longest-serving leader, who has been in office since 2005, is due to step down in 2021.

After Merkel suffered a series of involuntary shaking spells at official ceremonies, she began sitting at meetings, stating that “I take care of my health.”

READ ALSO: Should Germany be worried about Merkel's health after trembling spells?

In the meantime, the chancellor has been stepping out of the public spotlight. It was reported that she gave 22 interviews in 2018, versus an average of 60 per year beforehand. Merkel, on her fourth visit to India, thanked Modi for the “very warm and gracious welcome” and said German-Indian ties were “broad-based and deep”, the Press Trust of India reported.

Merkel added that Germany and India want to cooperate more closely than in the past on high tech, climate protection and renewable energies.

India has great potential, especially in the area of digitization and artificial intelligence, Merkel said on Friday.

Modi thanked Merkel for her contribution to strengthening relations between the two countries in recent years.

He spoke of wide-ranging strategic cooperation, which had made progress, particularly in the area of high tech.

He added that Germany and India shared values such as democracy and the rule of law, and will continue cooperating in large international organizations on fighting extremism and terrorism.

At the same time, the Chancellor stressed that the economic relations between the two countries could be even more intensive. Behind the UK, India has the most of its European investments in Germany.

As a whole, there are around 100,000 Indians living in Germany, and 175,000 of Indian origin. The fifth largest group of international students to Germany comes from India, and one third of all so-called Blue Card holders – or highly qualified workers, especially in IT – in the Bundespublik come from India.

READ ALSO: Explained: How to get a Blue Card to live – and work – in Germany