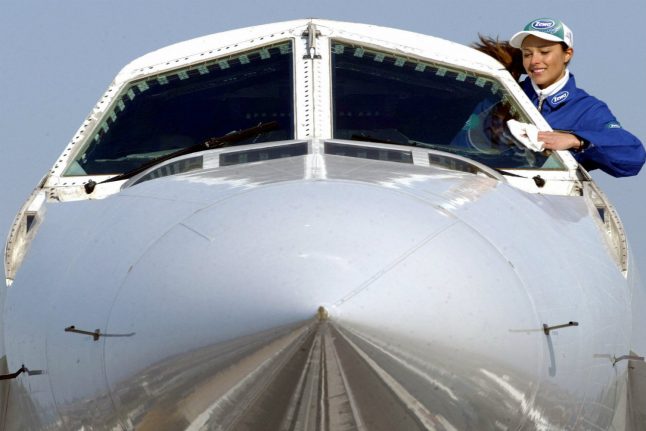 Miss Germany 2004 Claudia Hein (undoubtedly a Blitzsauber woman) cleans the windshield of an aircraft until it is Blitzsauber. Photo: DPA

The term 'squeaky clean' may not exist in German, but at least we have Blitzsauber. Coming from the word “Blitzen,” which means to light up, to appear or even to streak (run nude), the word refers to something so clean it sparkles.

Breaking down the word even farther brings us to Blitz, which simply means lightning.

The word Blitz is most famous in English as part of the phrase Blitzkrieg, a method of fast-paced warfare using aircraft implemented during World War II. But Blitz, Blitzen and Blitzsauber by themselves are not related to warfare, and remain correlated to more positive ideas like “lighting up” and “sparkling.”

For example, a secondary definition of “Blitzsauber,” which applies especially to young women, means gleaming or magnificent. This usage is more common in southern Germany or Austria.

It can also apply to an ideal situation, or something meeting or exceeding all expectations.

“Yesterday I cleaned the entire apartment until it sparkled. It will probably never happen again.”

“The actress in the leading role was magnificent.”