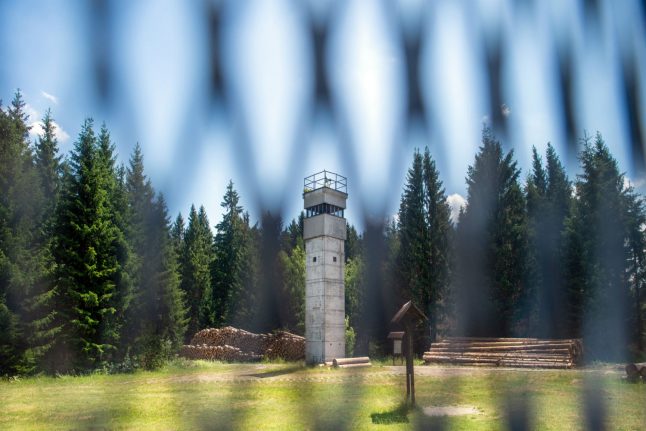 A museum lies directly on the Green Belt in Sorge, Saxony-Anhalt. Photo: DPA

Today, the 50-year-old still regularly marches up and down the former death strip, no longer as a conscript of the communist dictatorship, but as an ornithologist surveying the area for wildlife.

Rare dragonflies, Eurasian otters and wildcats now call the strip home. In all, more than 1,200 species on the red list of endangered flora and fauna can be found. Hikers on the Green Belt in Milz, Thuringia. Photo: DPA

“This place has transformed from a death strip into a line of life,” Olejnik told AFP, standing just metres away from a watchtower where he sometimes patrolled past as part of his duties during his 14-month-long military service.

Olejnik said he was only ordered once to load his machine gun but thankfully never had to fire a shot.

Alarmed by increasing flight to the West, the GDR communist regime began in
1952 to construct barriers to keep its citizens in.

A ditch to block cars from ramming through to the West was dug along the border, and a protective strip of about 500 metres in diameter was installed.

A further five-kilometre-wide area became a restricted zone accessible only
to those deemed loyal to the regime.

Barbed wires were installed, later replaced by metal meshes and electronic signalling systems. A total of 327 people lost their lives on the inner-German
border, an official study showed, although victims' associations put the
figure higher.

Over time, the space snaking from the Czech border up to the Baltic sea became no-man's land, allowing nature to move in.

“Because of the border situation, the area became a high-quality living space for wildlife,” said Dieter Leupold, who like Olejnik, works at nature group BUND which spearheaded the Green Belt project.

Birdwatchers in West Germany counted among the earliest to appreciate the
natural value of the border.

“Since the 1970s, we recognised the outstanding value of the Green Belt from the West through our binoculars,” said Kai Frobel, one of the founders of the nature zone. Part of the Green Belt in Ifta, Thuringia. Photo: DPA

Rare bird species like the whinchat or red-backed shrike were making their appearances — something that also caught the eye of fellow nature enthusiasts in the East like Olejnik.

A month after the fall of the Berlin Wall, “during a meeting between environmentalists from east and west, a resolution was adopted to protect the
Green Belt as a line of life,” said Leupold.

BUND persuaded the authorities to turn over for conservation purposes land left unclaimed by owners following reunification — totalling about half of the former border area.

But for the rest, BUND has had to purchase them back from landowners, spending five million euros ($5.6 million) to buy 900 hectares (2,224 acres) of parcels to date, with a view of creating a continuous nature conservation strip along the entire former border.

The extraordinary project has attracted attention as far away as in South Korea, which has sent delegations to study the experience, in the hopes of one day replicating it at the demilitarised zone (DMZ) separating the communist North from the democratic South.

Underlining the significance of the project, Frobel said his most striking memory was of a pair of courting whinchats perched on the border fence.

“That was a symbol of hope that nature knows no borders.” Just before dawn on a wet October's day, the loud cackling of wild geese rang through the forest.

At first light it became clear that the cacophony did not stem from a few dozen birds, but thousands — as if discussing their day's agenda at the top of their voices.

Suddenly, they appeared to fall silent before a giant “whoosh” whipped through as they took off into the skies, leaving hundreds of cranes behind.

A few moments later, a deer stopped to graze in the backdrop.

This natural theatre at a wooded area by the Green Belt underlines its importance to preservation throughout Germany and Europe, noted Leupold as he whipped up his binoculars to peer at a fox slinking by unperturbed cranes.

For the long-legged birds, “this area is their retreat,” noted Leupold.

“You can say that the area bears national responsibility as their living space.”

But BUND's vision is far from completely realised, as 12 percent of land along the zone is still used for intensive farming or roads.

It is increasingly difficult to convince farmers to sell, with some owners now demanding parcels elsewhere in exchange.

The group is now looking to the state parliament of Saxony-Anhalt to class the area a protected zone by the end of October, as Thuringia region did last year.

If successful, that could provide BUND with financial and human resources to fill in the gaps at the Green Belt, which the group wants ultimately protected as a national heritage site.

“This dimension is inseparable from the Green Belt and much needs to be done to shed light on the period,” Leupold said.

Many details — whether about villagers forced to relocate or the numbers of people who died at the border — are still hazy.

“A historian once said that at least 30 years must pass before historians take an interest. I hope the time is now,” said Leupold.