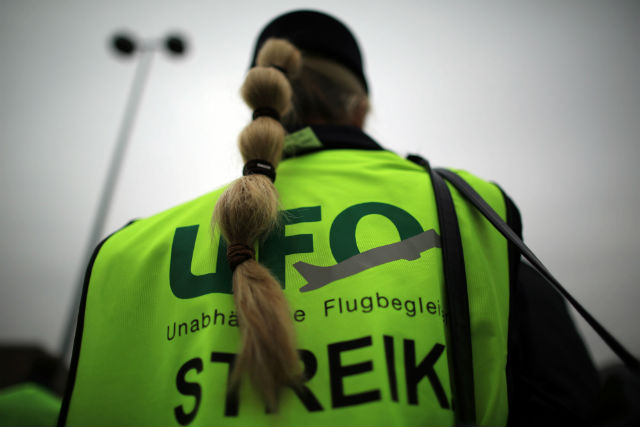 A flight attendant is standing in front of the Cologne headquarters of the Eurowings airline at a rally in 2016. Photo: Oliver Berg/dpa
“After Lufthansa announced it would more than fulfil our wage demands with a voluntary two percent increase, UFO is calling off our Sunday warning strike,” the worker representatives said in a statement.
But the union added that it had a series of further technical pay demands that it had communicated to bosses.
Meanwhile, UFO called workers at Lufthansa subsidiaries SunExpress, CityLine, Germanwings and Eurowings to carry out strikes of their own Sunday on flights departing from German airports between 5:00 and 11:00 am (0300 to 0900 GMT).
READ ALSO:
Lufthansa's unilateral pay move at the flagship, “shows that even if we don't have an offer yet, the pressure on the company was too much and they're grasping that workers won't allow themselves to be pressurised,” the union said.
UFO added that travellers should check with carriers to find out about possible cancellations or delays.
Lufthansa did not immediately respond to the union announcement. It had said when the strikes were announced Monday that it would “maintain its entire timetable” despite the walkouts, calling UFO's call to strike “illegal”.
Bosses at the airline group believe UFO may no longer have the legal right to speak for workers and have challenged its status in court. Internal disputes at the union have cost it members and support among cabin crew, some of whom have now turned to other representative organisations.
Berlin daily Tagesspiegel on Monday called UFO a “half-dead” outfit.   “UFO is battling for its life,” agreed business daily Handelsblatt.
“With its far-reaching call for strikes, it wants to show members it remains capable of acting and is representing cabin crew interests.”
Lufthansa could also contest before a court whether UFO has the right to initiate a strike — potentially leaving the worker representatives on the hook for any resulting costs.