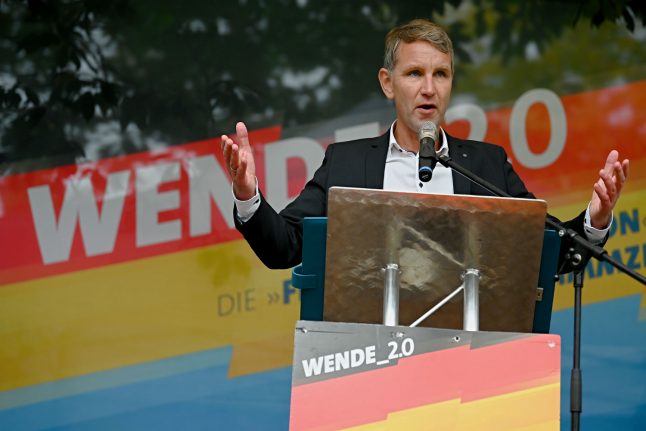 As the country searched for answers after the rampage by a suspected neo-Nazi who had tried to storm a synagogue in the eastern city of Halle, several critics accused the Alternative for Germany party of making aggressive bigotry mainstream.

He noted that leading figures in the party had called Germany's cherished culture of Holocaust remembrance and atonement for Nazi crimes into question,
just as they criticized Jewish religious rites.

“The AfD has a great number of views that are hostile to Jews,” Klein told public broadcaster ZDF.

“For instance their position that ritual slaughter of animals (for kosher food preparation) should be banned.”

He pointed to AfD chief Alexander Gauland, who has expressed “pride” for the actions of German soldiers during World War II, and dismissed the Nazi period as a mere “speck of bird poop” in Germany's history.

Klein's post was created last year in response to a sharp rise in hate crimes against Jews in Germany seven decades after the Holocaust.

Suspect Stephan Balliet, 27, is accused of shooting two people dead on the Jewish holy day of Yom Kippur, after he tried and failed to storm a synagogue filled with at least 50 worshippers.

He admitted to the crime and confessed that it was motivated by anti-Semitism and right-wing extremism, federal prosecutors said Friday.

The gunman made a 35-minute video, obtained by AFP, in which he filmed himself launching into a diatribe against women and Jews and denying the Holocaust before carrying out the attack.

Although Balliet is believed to have committed the assault alone, commentators noted he had tapped into a murky pool of extremist ideology readily found online.

Without mentioning the AfD by name, Chancellor Angela Merkel and President
Frank-Walter Steinmeier, an outspoken critic of the party, on Thursday condemned xenophobic rhetoric they said had grown increasingly commonplace and dangerous.

The head of Munich's Jewish community, Holocaust survivor Charlotte Knobloch, said the attack showed “how quickly the words of political extremists can get turned into action” and accused the AfD of “paving the way for this with its culture of hatred and incitement”.

On Friday party co-president Jörg Meuthen insisted that the AfD was a
“pro-Israeli and a pro-Jewish party”.

“We are actively engaged in supporting Jewish life in Germany — for us it
is a key part of our identity.”

But Bavarian Interior Minister Joachim Herrmann said the AfD had contributed a slipping of long-standing taboos in German life, offering legitimacy to hatred and even bloodshed.

“On the one hand you have these horrible violent criminals, who we need to protect ourselves against, and on the other hand the intellectual arsonists,” said Herrmann, who has himself come under fire for harsh language against asylum seekers.

In the wake of the Halle attack, Bavarian state premier Markus Soeder
called for the AfD to expel Björn Höcke, a leader of the party's most
radical wing who has called for a “180-degree shift” in Germany's remembrance
culture.

The AfD began as a eurosceptic outfit in 2013 but has since morphed into a nationalist anti-migration outfit.

The influx of more than one million asylum seekers 2015-16 allowed its support to surge but its poll numbers have plateaued since then at about 14 percent.

It is represented in all 16 of Germany's regional legislatures and has
nearly 100 seats in the Bundestag.

Centrist politicians at the time blamed the AfD for stoking anti-refugee sentiment and raised questions about whether Germany had failed to take a rising threat from right-wing extremists seriously.