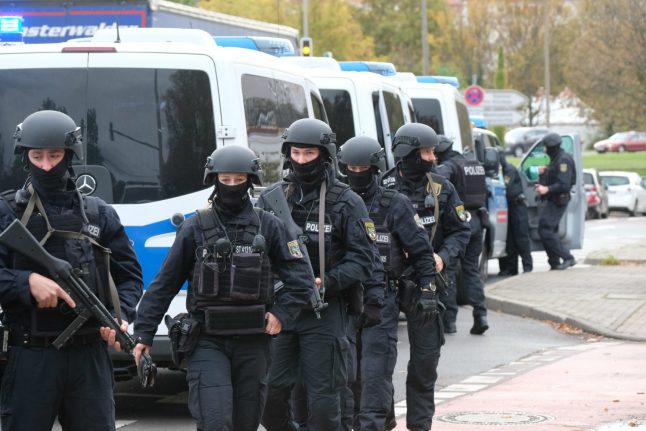 Two people, said to be a man and a woman, were shot dead near a synagogue in the German city of Halle in Saxony-Anhalt, around 30 minutes away from Leipzig, on Wednesday.

A synagogue and a Turkish restaurant were the targets of the attacks.

According to reports, the male victim was shot dead near a snack bar, while the woman was killed in Humboldtstraße.

Two people were also seriously wounded in the shooting and were undergoing treatment in hospital.

The attack took place on Yom Kippur, one of the holiest days in the Hebrew calendar when there were about 80 worshippers inside the synagogue.

Jewish community leader Max Privorotzki, who was in the Halle synagogue, told Stuttgarter Zeitung that “we saw through the camera of our synagogue that a heavily armed perpetrator wearing a steel helmet and rifle was trying to shoot open our door.”

“The man looked like he was from the special forces. But our doors held firm,” he said, adding that there was also an attempt to shoot open the gate to the neighbouring Jewish cemetery.

“We barricaded our doors from inside and waited for the police,” he said, adding that “in between, we carried on with our service.”

Where exactly did it happen?

The shooting took place in the Paulus quarter north of the city centre around midday, police said. The map below shows the area where the attack happened and where Halle is located within Germany. In another incident, a police spokeswoman confirmed that shots were fired in Landsberg, about 15 kilometres from Halle.

Anja Werner, the mayor of Landsberg, later said a car had been hijacked and driven onto a motorway that leads to Munich.

“According to what we now know we have to assume that it was at least an anti-Semitic attack,” Seehofer said in a statement.

“According to the federal prosecutor there are sufficient indications for a possible right-wing extremist motive.”

German Chancellor Angela Merkel attended an evening vigil at a historic synagogue in central Berlin in honour of the victims of a Yom Kippur attack in the city of Halle Wednesday.

It was called in solidarity with the Jewish community following the shooting which left two dead.

Police have arrested one suspect in connection with the incident. It is not clear if there are further suspects.

Did the gunman film his attack?

The shooter is reported to have posted a video of the attack on the Twitch livestream platform owned by Amazon, the company said.

In a copy of a 35-minute video obtained by AFP but whose authenticity has not been confirmed by police, the gunman filmed himself launching into a diatribe against women and Jews, before carrying out the attack, in a disturbing repeat of the modus operandi of the attacker in the Christchurch mosque assault earlier this year. Have police caught the suspect?

Police had urged residents to stay indoors amid a manhunt as “perpetrators had fled in a car”.

A suspect was subsequently arrested, and almost six hours later, police lifted the lockdown, assessing that there was no longer acute danger. But it was unclear if other suspects were being sought.

Police urged local residents to remain vigilant but later on Wednesday night German police appeared to suggest the manhunt was over.

Police confirmed to AFP that the man arrested was indeed the suspect in the shooting and was being treated for his injuries.

Is this is a terror attack?

German authorities believe it's likely. Anti-terror prosecutors said they had taken over the probe.

The spokesman for the federal prosecutor's office said the step had been taken given “the particular importance of the case” which he said involved “violent acts that affect the domestic security of the Federal Republic of Germany”.

Security has also been tightened in synagogues in other German cities while Halle is on lockdown. Trains were not stopping at Halle main station in the afternoon. Police climb over a wall at the shooting scene. Photo: DPA

Is anti-Semitism growing in Germany?

Germany, like other western countries, has watched with alarm as anti-Semitic and other racist hate speech and violence have increased in recent years as the political climate has grown more polarized.

Anti-Semitic crimes rose by 20 percent in Germany last year, according to Interior Ministry data, which blamed nine out of 10 cases on the extreme right.

Earlier this year, Felix Klein, Germany's commissioner for anti-Semitism said he was “extremely alarmed” by the sharp rise.

The attacks also come three months after the shocking assassination-style murder of local pro-migrant politician Walter Lübcke in the western city of Kassel, allegedly by a known neo-Nazi.

Lübcke's killing has deeply shaken Germany, raising questions about whether it has failed to take seriously a rising threat from far-right extremists.

Interior Minister Horst Seehofer last month warned of the rising danger of the militant far right, calling it “as big a threat as radical Islamism”.

Seehofer said that police had uncovered 1,091 weapons including firearms and explosives during probes of crimes linked to the far right last year, far more than in 2017 when 676 were found.

Germany has also been on high alert following several jihadist attacks in recent years claimed by the Islamic State group.