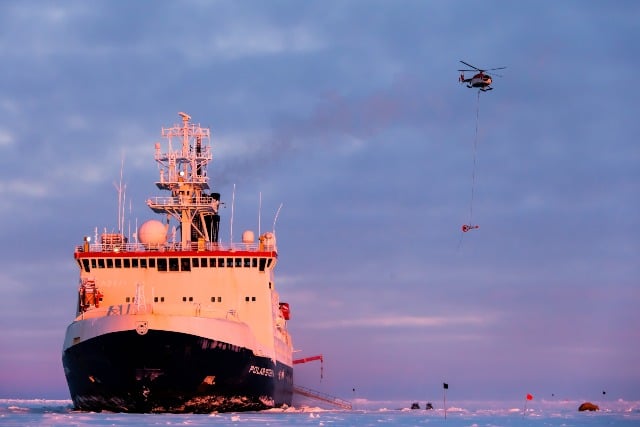 Aboard the massive icebreaker Polarstern, belonging to Germany's Alfred Wegener polar and marine institute, researchers hope to glean new understanding of the Arctic as the planet heats up.

The 140-million-euro ($155 million) mission will study the atmosphere, ocean, sea ice, ecosystem and natural processes — looking to build a picture of how climate change is affecting the region and the entire world.

“The Arctic is the epicentre of global warming, it is the part of our planet which warms most rapidly, where the warming rates are at least twice the global average,” said mission leader and atmospheric scientist Markus Rex at a press conference in Tromso, Norway, hours ahead of departure around 8:30 pm (1830 GMT).

Now with “the largest Arctic research expedition that has ever been carried out,” scientists will probe “the part of our planet where we do not understand the climate system very well,” he added.

During preparations, it was “fascinating to see how all these nations work so closely and so efficiently together,” Rex said.

“We can't wait to get there, to do the research that is so urgently needed to understand the Arctic climate system better.” Rex pointed to “very large… huge” uncertainties in global climate models, stemming from the lack of detailed data about the polar circle.

“Our representation in our climate models is not on a firm basis,” he said.

“We want to provide the robust scientific basis for the important political decisions, the decisions our societies now have to make to mitigate climate change.”

Back in Germany, tens of thousands took to the streets Friday to demonstrate for more effective climate protection, as politicians unveiled a new package of greenhouse gas-fighting measures set to cost at least 100 billion euros by 2030.

The Polarstern will set off from Tromso and then moor to a huge iceberg before drifting for almost a year through the central polar region — the ice freezing at least 1.5 metres (five feet) thick around it as winter draws in.

A fleet of four icebreakers from Russia, China and Sweden, as well as aeroplanes and helicopters, will resupply the ship and rotate crew members in and out. But while the expedition has been eight years in the making, its 2,500-kilometre (1,550 mile) journey through temperatures as low as minus 45 degrees Celsius (minus 49 Fahrenheit) and 150 days and nights of darkness will be unpredictable.

“We don't know where we are going to be a year from now,” Rex said.

“Although we have done everything to minimise risks, we will be isolated,” with the nearest human beings over 1,000 kilometres away, he added.

Once frozen in place, the Polarstern itself will remain home to all the expedition members — around 100 people at any one time.

Around it, a miniature city of science will spring up on the ice, divided into sections to keep the different researchers' experiments from interfering with one another.

A third section focuses on study of the seawater itself, with a heated tent keeping samples above freezing point, while still another will bristle with sensor masts and tethered balloons probing the atmosphere.

The runway and a network of sensors spreading up to 50 kilometres from the ship complete the picture — as well as a team of at least six lookouts on “polar bear watch”.