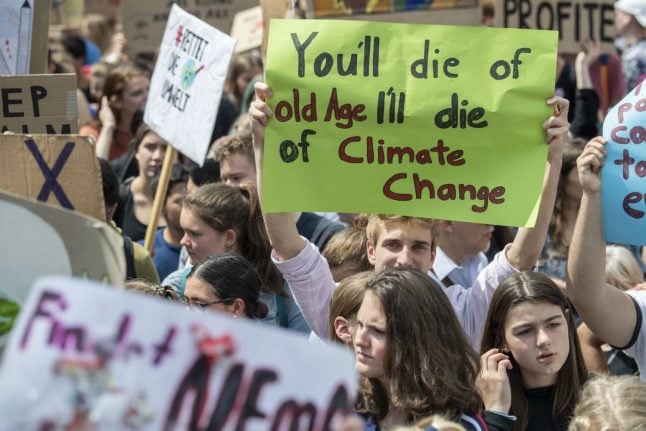 Demonstrators at a Fridays for Future march in Frankfurt earlier this year. Photo: DPA

Merkel's conservatives and the centre-left Social Democrats were expected to haggle late into the night on the details before the landmark policy package was due to be announced Friday.

The EU's biggest economy is set to miss its climate targets for next year but has committed itself to meeting the 2030 goal of a 55 percent cut in greenhouse gas emissions from 1990 levels.

After two blistering summers and a wave of Fridays For Future student strikes and other environmental protests, the Merkel government has faced rising pressure to step up its efforts to protect the climate.

READ ALSO: Six things to know about the upcoming climate strikes in Germany

The coalition now looks to commit to spending “in the triple digit billions”, or at least €100 billion, according to the nearly 140-page draft paper titled “Climate Protection Programme 2030” seen by AFP.

The document states that “the additional investments in climate-friendly measures will support the economy” and help future-proof Germany as a business, trade and investment location.

Germany wants to implement “a variety of effective and ambitious measures to reduce greenhouse gas emissions” and help “preserve the foundation for life on Earth”, the draft paper said.

How will Germany tackle climate change?

Measures listed would tackle emissions in the energy and industrial sectors as well as in housing, transport, agriculture, waste management and the state apparatus itself.

The government aims to step up subsidies for the purchase of zero-emission electric vehicles and expand the country's still under-developed electric car charging infrastructure.

The two coalition parties are currently unresolved on how to better price harmful carbon emissions from oil, gas and coal into economic activity in order to incentivize clean alternatives.

While Merkel's party wants to expand the trading of emission certificates, the Social Democrats have called for a carbon tax.

Merkel's government will announce its plan on the day expected to see the biggest international wave of climate strikes yet by the Fridays for Future movement and the hundreds of civic groups that support it.