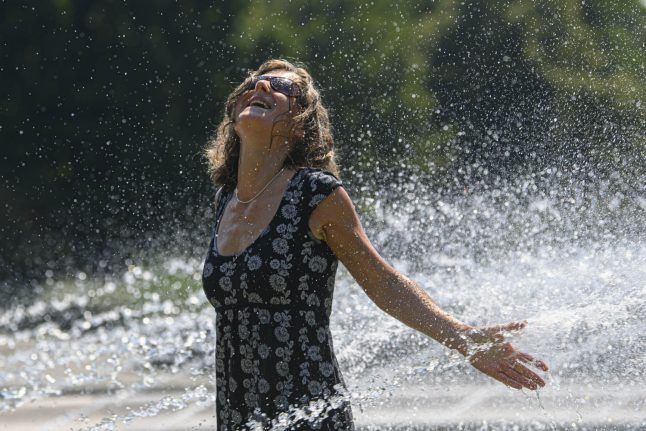 A woman cooling down during the heatwave in Dresden's Albertplatz on Friday August 7th. Photo: DPA

Before I went to Dresden with a couple friends, I knew just two things about it. One, that the city had been firebombed in World War II, which I’d read about in Kurt Vonnegut’s Slaughterhouse-Five. And two, that the city was experiencing a rebirth, having rebuilt much of what had been destroyed.

Dresden straddles the Elbe, 30 km from the Polish border and only 115 km from Prague — a city I was reminded of often while exploring the Saxon capital. Arriving at the central train station puts you immediately on a major pedestrianized commercial area, Prager Straße. The commercial Prager Straße on a Saturday. Photo: Laurel Wamsley

On a sunny Saturday afternoon, the area was thronged with shoppers and families, and children splashed in a shallow pool in the plaza. A huge residential superblock appeared to my right, a marker, as in so many German cities, of postwar reconstruction.

The building, called Prager Zeile, was constructed in the late 1960s and was inspired by Corbusier’s Unité d’Habitation. One of the largest residential buildings in Europe, it was then renovated and rebuilt a decade ago. Today’s Prager Zeile is at once GDR-era modernist and brightly modern, a study, like Dresden itself, of mixing old and new in ways that can sometimes be difficult to separate.

A few turns later, we were in a charming old-style plaza, presided over by Freuenkirche, a baroque church noted for its bell-shaped dome made of stone. Following the city’s 1945 bombing, the church at first remained standing. But the fire burned away the wood pews and galleries within — and after a couple days the structural piers collapsed under the weight of the 12,000-ton dome. The Frauenkirche lit up at night. Photo: DPA

The ruined church remained as rubble for decades, as the city had neither the funds nor the political will to rebuild while it was part of the GDR. It became a center for peace protests before being rebuilt between 1994 and 2005, in some cases using the remnants from the old church.

It’s worth peeking inside to see the renovated structure, and for a fee you can hike up to a viewing platform at the dome for a splendid panorama of the city.

We pressed on, looking for the museum where the works by the Old Masters are found, the Gemäldegalerie Alte Meister. The Semper Building, which normally houses these works, is currently closed. A woman walks through the Gemäldegalerie Alte Meister in March. Photo: DPA

So 100 of the best-known pieces are on display in part of the Zwinger, Dresden’s spectacular palace, created at the behest of Augustus the Strong in the early 18th century, now home to a staggering array of art.

Indeed, the Dresden State Art Collections populate 15 different museums clustered in and around the Zwinger. The museums read like a gilded list of royal interests, with offerings that include the Mathematics and Physics Salon, the Porcelain Collection, the Historic Green Vault of precious objects, the Turkish Chamber of Ottoman art, as well as collections of coins, armory, Renaissance costumes, and three different ethnographic museums.

We made our way to the rooftop terrace of the Zwinger, where a cafe offers a great place to enjoy an apertif with a view. We strode among the statues, looking out across the expanse of the royal grounds and a Ferris Wheel in the city beyond. When the grand clock struck six, we resolved to come back to one of the museums in the morning. Crossing the Elbe put us in the Neustadt neighborhood, where we immediately fell in love with its youthful, casual vibe. We made our way to Katy’s Garage, a pleasant Biergarten where a singer-songwriter serenaded in German. We stayed a while, drinking the local pilsener and enjoying nibbles from a menu that ranges from wurst to flammkuchen to eggplant.

Strolling through Neustadt, visitors have their choice of atmospheric spots to while away the evening, from gelato shops to dimly lit bars.

An almost-secret passageway leads to Lila Sosse, a gorgeous restaurant that’s the perfect place for a glass of wine amid the sounds of the city murmuring through the courtyard.

In the morning, it’s your choice of museums. High on many lists will be the Daniel Libeskind-designed Military History Museum. Or spend time among the objects of the near past at Die Welt der DDR museum. We opted for modern art.

After grabbing breakfast in Neustadt, we crossed back to Altstadt, the old city, and headed for the Albertinum, which houses stunning art by the “new masters.” Inside the Albertinum. Photo: Laurel Wamsley

The museum touts that its collection ranges from Caspar David Friedrich to Gerhard Richter, but in reality its galleries span much more, including a painting (on loan from Belgium) by Kehinde Wiley, lauded for his portrait of Barack Obama.

I found myself rapt before works by German painters Max Liebermann and Otto Dix. The galleries could benefit from explanatory text, and some rooms seemed to mush disparate works together, but in all the former arsenal is home to an exciting variety of art from the Romantic era to today.

A light rain started to fall as I made my way back through the city to the Hauptbahnhof, where I had a train to Berlin to catch. Construction cranes dotted my path, an emblem of change in a city bold enough to rebuild the structures from its past while designing a new future.