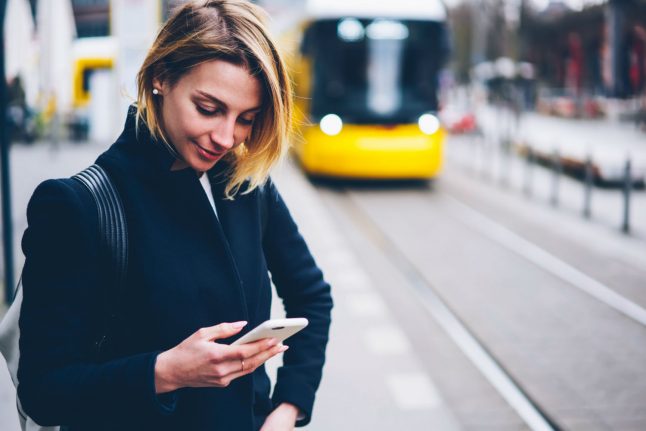 A woman on her phone as she waits for Berlin's tram. Photo: depositphotos/GaudiLab

Dating apps: the 21st century’s fast-track way of finding the perfect partner. At least for some.

I’ve tried them all. Upon the emergence of Tinder in the U.K, I downloaded the app to see what the hype was about and proceeded to spend my bus journeys to work participating in the endless swiping game.

Pictures of men with their shirts off tensing their muscles, geeky-looking guys in glasses and serious hikers clad in thick coats and hats popped up on my screen and unfortunately disappeared into my “sorry, no” pile.

I even went on a few dates. The guy who ended up having a long-distance girlfriend in a city three hours away, the man who pretended to be a chef in a high-class restaurant when he actually owned a vape shop in a town outside Brighton, and the character who declared I would be better looking with a different haircut were among my favourites.

Yes, my brief stint with dating apps was fun, but it also got old quite quickly. If anything it was just too much admin.

Swiping through a hellishly long reel of people’s profiles became akin to wading through a sea of emails on a Monday morning. Trying to arrange a time to meet with elusive people that would only ghost me a few weeks later became as dull as watching paint dry.

My frail attempts to build rapport with the few eligible bachelors on the app ended up being just another, rather sad, way to procrastinate during the working week.

Yet, it wasn’t until I arrived in Germany in January 2018  – clueless with no friends and a suitcase crammed full of clothes I would probably never wear – that I began to realise the true value of dating apps.

Not just a search for love

Big cities can be lonely places. The sheer number of people in any bar, restaurant or club often choke the chances of meeting anyone new.

Amid battling with the masses for the last spot on the underground, pushing our way to the front of the queue at the supermarket or swiftly grabbing a coffee-to-go at a cafe, we often fail to be tuned in to the people around us. Of course, the language barrier also doesn’t help when in a foreign land.

What dating apps serve to do is filter out the many people you would never in a million years click with and increase the probability of finding someone that you might just want to get to know.

Feeling swallowed whole by this new, overwhelming city, I downloaded Tinder within my first few days of arriving in Berlin with the hope that this might just happen to me. Almost instantly, the stigma I had long associated with dating apps being places of overzealous wink faces and strange pick-up lines began to dissipate. Many willing people from a variety of backgrounds and nationalities popped up on the app offering their advice on where to go, what to do and how to survive in a place as wild as Berlin.

It was as if I’d had this resource under my nose for a long time – even while jumping from city to city in the UK – and had never quite tapped into its potential.

Bumble, Tinder, Hinge, you name it, are all canny tools for foreigners in big cities. Beyond curing loneliness, they act as a soft landing pad for foreigners needing info to get around.

My first successful Tinder date happened on the banks of Maybachufer in Kreuzberg. It was sunny and scenic and an opportunity that not only found me a friend but a job and a flat too. (I’m not kidding.)

As I began to make more connections via the app, more of the city seemed to unfold. There were countless times when fellow internationals or friendly Germans helped me find out things about their city: from underground bars, vintage shops filled with quirky emblems from the GDR to the best places to bike, swim and buy groceries.

My oldest friend in Berlin even found a candidate for a job at her workplace through a connection she made on Tinder. She tells me that they’re good friends, as well as colleagues, to this day.

Depending on which way you look at it, Berlin is a notoriously hard place to date. Often touted as a place of experimentation, liberalism, and round-the-clock parties, the city draws in many expats that seem reluctant to put down roots. But it’s so much more than that too.

READ ALSO: 'It's not impossible': The ups and downs of dating in Germany

A few dates into my new life in Berlin, the city revealed itself as a place brimming with people willing to help and accommodate any confused newcomer – an aspect I may never have discovered if it wasn’t for tinder.

Using these apps for networking purposes has perhaps been easier in Berlin than in the U.K. simply because my status has changed. I’m no longer a Brit that knows the lay of the land, but a baffled international that still often needs some wise words from an experienced local.

And while I remain proudly single, I’ve learned that success on online dating apps doesn’t have to mean finding true love or securing as many dates as possible. It can be as simple and rewarding as meeting other like-minded people who can help you settle into life in a new city.