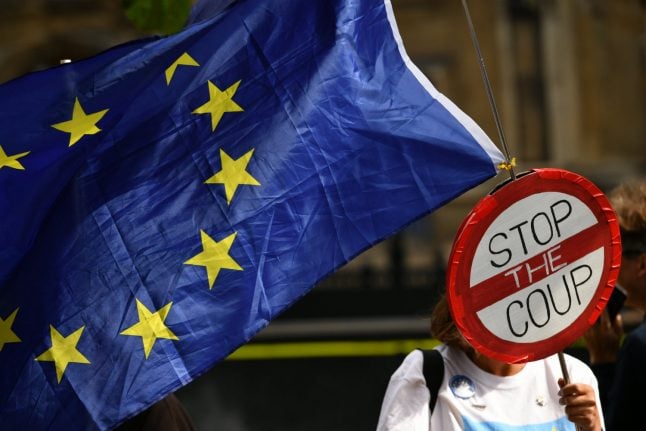 UK Prime Minister Boris Johnson on Wednesday lost a major vote in UK Parliament that could force him to delay Brexit, and is now trying to bring forward a motion for an early election.

It's the latest drama, which comes after Johnson’s controversial decision to suspend parliament just weeks before the October 31st Brexit deadline in a move that sparked outrage across the country last week.

Shockwaves have also been felt by British people living in Germany who – like others on the continent – still face uncertainty.

Matt Bristow, of citizens rights group British in Germany, told The Local that anxieties are already high among British people as insecurity over their future grows.

And he said the ongoing Brexit news cycle “absolutely” added to Brits in Germany’s concerns.

Glen Johnson, 42, who lives in Frankfurt, told The Local he looked at recent events “with utter despair”.

Lee Macey, 40, from London has been in Frankfurt since December 2017. As a British national abroad, he feels the events in the UK are “embarrassing”.

Meanwhile, Berlin-based Brit Rose Newell, 33, said she felt angry – and is helping to organize a demo in Berlin against the plan to suspend the UK parliament.

In Germany, the media has been reporting daily with “Brexit chaos” headlines. Last week Zeit said in an opinion piece regarding Johnson's move to suspend parliament: “This is how democracies end.”

Meanwhile, daily Bild spoke of a “Boris-Beben” (Boris-quake), indicating how the move shook the country.

FAZ said the action “once again illustrates the division of Britain”. Whatever happens inside the House of Commons, the threat of a no-deal looms large. With everything up in the air, fears are growing over what will happen if the UK leaves the EU without a deal on October 31st.

As The Local has reported, the German government says it is planning a no-deal Brexit residency law – called the Brexit-Aufenthalts-Überleitungsgesetz (Brexit Residence Transition Act) – which guarantees that all British people and their family members will receive residence permits if the UK crashes out of the EU without a deal.

However that law hasn’t been passed yet.

“There’s nothing set in stone at the moment,” Bristow said. “People are saying there are no guarantees at this stage and they’re worried that even the very limited set of rights that we’re being told we’ll get are now at risk.”

Bristow said there are still unanswered questions. “Under a no-deal outcome there will be massive implications for pensioners, for cross-border workers, and in terms of health care,” he said.

“There are so many different things that the UK government has not yet realized.”

He said Germany was “well prepared” and open to discussing issues, but there are, understandably, still worries among Britons.

He said: “The German government has been incredibly supportive but there are issues – for example pensioners who have to suddenly pay for healthcare when they haven’t been doing so already because they’ve been covered by the UK system – that could put people in huge financial difficulty.”

Berlin-based copywriter and translator Newell, who grew up in Gloucestershire, said she felt “anxious and enraged” about the situation in the UK, and the effect it’s having on so many people, both in Britain and on the continent.
Newell has dual German and British citizenship, but she is unsettled by the obstacles her German husband could face if they were to move to the UK in future, due to planned post-Brexit migration rules.
“In our case, we probably still can go home, but it’s going to be very expensive and a lot of paperwork,” she told The Local. “Considering the main reason we would spontaneously move home would be if a parent were dying or something, it adds a lot of general anxiety knowing we’ll face these sorts of complications.”
Newell said she feels for other couples facing a similar situation, who may be unable to jump through the same hoops.
“For many couples, this means that they are effectively trapped and they’ll never be able to move back to the UK,' Newell said. “A friend of mine has just married a German guy whom she’ll never be able to take home to live in the UK with her.”
For all The Local Germany's Brexit coverage CLICK HERE

Macey, who works in the tech industry in Frankfurt, said the German government’s reassurances that no British person would be forced to leave Germany were encouraging – but he still had concerns over applying for a residency title for the first time.

“I still do not know which residency title I would be entitled to, and what the conditions attached to that are – so would I have to stay in my current position? Or at least with my current employer, etc.”

Macey also said he was worried about other Brits, such as those in receipt of S1 healthcare or receiving benefits.

He mentioned a British person with disabilities who “is absolutely terrified” of applying for a residency permit in Germany.

Macey called on the German government to provide some clarity over “what residency titles are applicable to us, what the conditions attached to them are, and how the loss of our EU-citizens rights will be managed”. Going forward, Bristow of British in Germany said the citizens rights group will work with the German government to get more clarity on the future of Britons in Germany.

“We understand the German government is in a difficult position,” he said. “It has been very consistent in saying it is hoping for the withdrawal agreement to be passed. It has also made no-deal preparations.”

British in Germany also plans to march alongside other citizens' groups and those against Brexit, on October 12th in London at the Rally for our Rights demonstration.