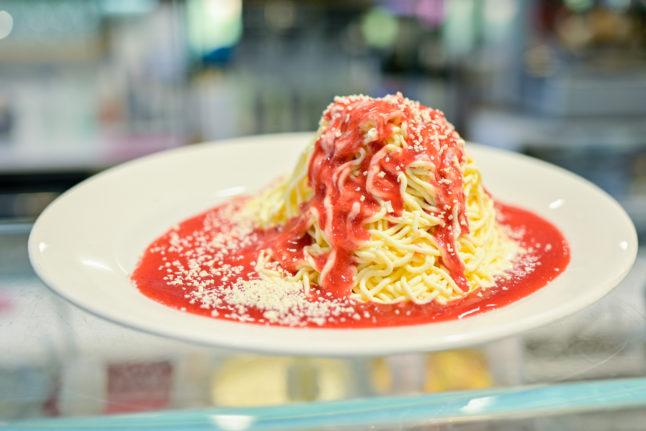 Spaghetti-Eis stands on the shelf of the ice cream counter at the "Intermezzo" ice cream café in Mannheim in 2019. Photo: picture alliance/dpa | Uwe Anspach

If there’s one thing Germans enjoy, it’s eating with the seasons. From Spargelzeit (asparagus season) in late spring, to the mountains of Lebkuchen (Gingerbread biscuits) which can be found in households during the long winters, foods have their time and place.

When it comes to summer there is plenty of choice, from healthy seasonal vegetables to tasty picnic food. Here are some of our favourite sweet snacks enjoyed by Germans during the summer months.

Seriously, we love this idea, which was brought to Germany by Dario Fontanella, Mannheim’s answer to Willy Wonka.

The ice cream factory owner reportedly came up with the concept in 1969. Spaghetti Eis is made by putting vanilla ice cream through a chilled Spätzle press to create ice cream noodles.

The fake pasta is then arranged on whipped cream and topped with strawberry ‘tomato’ sauce and finely chopped ‘parmesan’ white chocolate.

Nowadays, you’ll find it in lots of ice cream parlours across Germany, including variations such as a chocolate and hazelnut ‘carbonara’.

One of my best friends visited from Scotland at the weekend and we had the German speciality Spaghetti-Eis (pistachio version in green) and it was amazing. 🍝🍦 pic.twitter.com/VNE2qAmu6R

Fontanella, whose family emigrated to Germany from a town outside Venice in 1932, has previously said he just wanted to recreate the Italian national dish.

Thank you Dario Fontanella for giving us your pasta ice cream creation.

Another favourite of the Germans during the light evenings and lazy summer days is the Zwetschgenkuchen, a cake made with plums known as Zwetschge.

Germans will not forgive you for mixing up Zwetschgen, which are damson-like, small and oval, with regular Pflaumen, which are larger and rounder.

We don’t really understand the difference but we do know that this cake is delicious and if you take it along to a picnic you’ll be loved by your friends.

We recommend you try it with whipped cream and coffee. Summer is the time of berries so who are we to argue with a delicious dessert that is basically berry soup?

The Rote Grütze is a traditional northern German dessert and is perfect for the summer months when the Erdbeeren (strawberries) and Heidelbeeren (blueberries) are in full flow. It also includes blackberries, cherries and raspberries which are heated up and topped with whipped cream, vanilla sauce or ice cream.

It’s the perfect quick dessert if you’re having friends over and want to impress… or if you just want to treat yourself to a homemade dessert to enjoy on your balcony or in your garden this summer. The Rote Grütze in all its glory. Photo: DPA

Ok, fair warning, this one is only for the brave-hearted or stonkingly well-integrated among you. A bizarre concoction of eggs, wine and lemon, this was invented two hundred years ago for the Hanoverian aristocrats of the House of Welf, distant relatives of the British royal family. It is made up of two layers, the lower of which is a white foam of beaten egg whites, which is then topped with a yellow sauce made of egg yolks, lemon juice, sugar and dry white wine. It is then cooled to form one, yoghurt-like dessert in yellow and white, the heraldic colours of the House of Welf.

The culinary pride of Lower Saxony, it is safe to say that Welfenspeise did not export quite as well as the Hanoverian nobles themselves. But if you are feeling brave, or if you have some eggs you need to use up, then why not cool down with a weird and wonderful Welfenspeise? Yellow and white just like the Welfs. But can you stomach it? Photo: Deposit Photos

Literally meaning “food of the gods”, this jelly is also known as Wackelpudding or Wackelpeter (wobbly Peter). Essentially just the glorious, gelatinous, e-number-rich phenomenon known to the Anglo-Saxon world as jello or jelly, Götterspeise has a special place in the hearts of all sweet-toothed Germans.

Often served with cream or vanilla sauce, one of the most popular flavours in Germany is woodruff, or Waldmeister. What seems bizarre to the outside world is a common flavouring in Germany, and has lead to translation issues in many a German bar or restaurant. 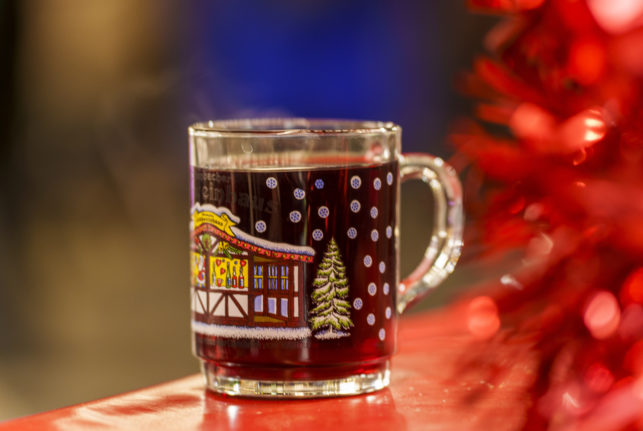