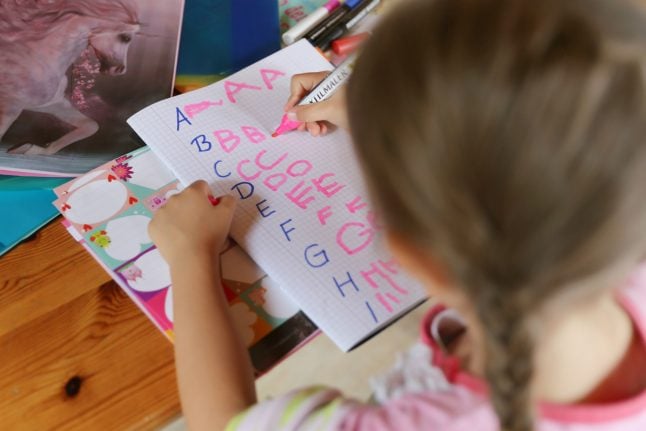 A youngster at a primary school in Germany. Photo: DPA

Carsten Linnemann, deputy leader of the Christian Democratic Union and its sister party the Christian Social Union parliamentary group, spoke out in favour of postponing the enrolment of children at primary school who do not speak German well enough.

He told the Rheinische Post: “To put it in a nutshell: a child who barely speaks and understands German has no place yet in a primary school.”

Linnemann pointed out that children who don’t know German should learn it before they start school.

“This is where compulsory preschool education must take effect and, if necessary, school enrolment must be postponed,” he added. “This costs money, but lack of integration and inadequate education are much more expensive in the end.”

Linnemann said he feared the development of “new parallel societies” in Germany if there is not a larger focus on integration.

Integration is a political hot topic in Germany, a country that's become increasingly polarized since Merkel's decision to accept an influx of refugees in 2015. Linnemann's remarks have been met with criticism – even from within his own party.

Schleswig-Holstein’s education minister Karin Prien, also of the conservative CDU, told the  Süddeutsche Zeitung it was “populist nonsense’ and to not allow youngsters to start school was the “completely wrong way” to go about things.

Children who have poor German language skills should be taught “within the framework of regular schooling” in classes that offer German as a second language, Prien said.

The Christian Democrats, in particular, should “draw attention to the social and societal achievements of compulsory schooling,” Prien added.

Udo Beckmann, chairman of the Education and Training Association (VBE), said not allowing children to start school because they can’t speak German is a “declaration of political bankruptcy”.

“After all, it boils down to the fact that children with a migration or refugee background are the most likely to be put on the back burner,” he said.

Instead, the VBE said there should be more support from the government for day-care centres (Kitas) to expand language teaching and support.

'We must prevent this'

In the Rheinische Post interview, Linnemann said the CDU must look at its integration policies and cited recent disturbances involving people from migrant backgrounds, including the attack in a Frankfurt train station where an Eritrean-born man living in Switzerland allegedly caused the death of an eight-year-old boy by pushing him under a train.

He said these incidents “stir people up and fuel fears that new parallel societies could emerge”.

“We must prevent this,” Linnemann added.

Katja Kipping, of The Left (die Linke) party, accused the CDU politician of unnecessarily linking school children with reports of adult crime, and said, in the case of the Frankfurt attack, the suspect had been living in Switzerland legally.

She said: “Is he not aware that the offender from Frankfurt, who obviously had a psychotic disorder, speaks fluent German and, as a Swiss, has practically the same migration background as Alice Weidel (of the far-right Alternative for Germany/AfD)?”

However, Linnemann did receive some support for his comments. The president of the German Teachers' Association, Heinz-Peter Meidinger, said Linnemann was right to point out that language support should take place before primary school.

According to Meidinger, children should pass compulsory language tests before they start school. “I am an absolute supporter of nationwide, comprehensive language level tests for three-and four-year-olds,” he said.