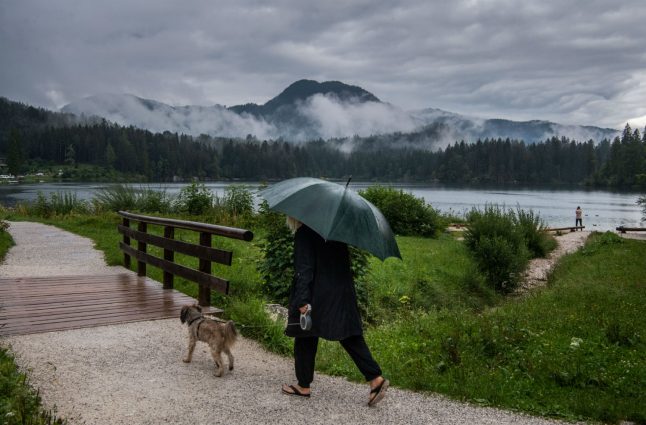 A woman goes for a walk with her dog at Hintersee near Berchtesgaden, Bavaria. Photo: DP

Amid an ongoing drought, farmers have been hoping for heavy rain in August – and they are likely to get a bit of relief this week.

Forecasters say an area of low pressure is directing warm and humid air to Germany this week, but rain and thunderstorms are expected too.

Germany's weather service said damp, warm and thundery conditions were expected in the coming days with risk of storms with strong rain and hailstones.

The German Weather Service (DWD) said highs above 25C are expected in some parts of the country this week, although it will remain cooler in the north around the coastal areas.

But the warm temperatures will be accompanied by showers and thunderstorms, resulting in humid and uncomfortable conditions.

“At times it will get really intense with heavy rain, hail and gusts of wind,” said Adrian Leyser, a meteorologist with the DWD.

The unsettled picture remains in place until Wednesday or Thursday, “particularly in the southern half of Germany,”  said Leyser.

Although water is a welcome addition to drought-hit Germany, forecasters say the rain may only fall in certain regions, and some areas will miss out on much-needed hydration.

On Monday, the northeast and southwest will avoid most of the rain (although they may see a few showers), while areas below the Danube river will get the most sun. Maximum temperatures are between 21C and 27C in the north, and 26C to 30C elsewhere.

On Tuesday it's also cloudy with showers and a risk of thunderstorms, especially in the south, southwest and central parts of Germany.

Temperatures will be between 20C and 25C in the north and between 25C and 30C everywhere else.

In the second half of the week, it is expected to get warmer, with the mercury hitting 30C. But that could be followed by more heavy thunderstorms.

The lesson? Pack your umbrella if you head out for an ice cream to cool down.