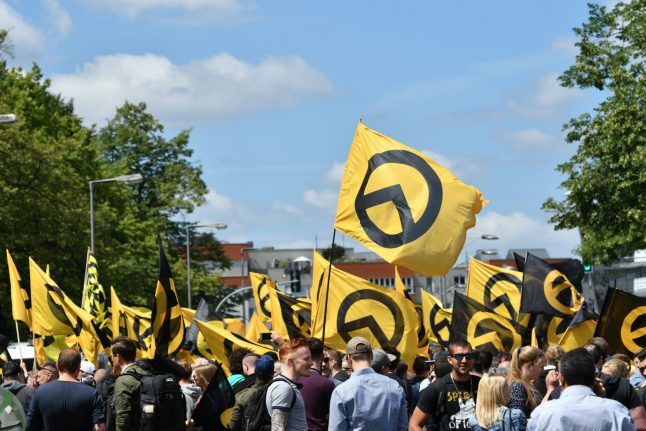 Supporters of the Identity Movement in Berlin's Brunnenstraße in June 2017. Photo: DPA

On Wednesday, Germany's Office for the Protection of the Constitution (BfV) concluded that the Identitäre Bewegung (Identitarian Movement, or IB) is “clearly right-wing extreme”.

The new classification allows the group to be observed by Germany's intelligence service. Three years ago, BfV classified the IB as a so-called suspicious case.

“As an early warning system, we must not only focus our attention on violent extremists, but must also keep an eye on those who are verbally igniting,” said BfV head Thomas Haldenwang.

In Germany, Identitarian Movement members have been known mostly for their vocal political activism, but have also been involved in small acts of violence. In January, they drew attention when they assaulted a taz newspaper employee in Berlin, who confronted them as they posted flyers outside their premises.

They also carried out other activities at other media and political sites throughout Germany in the hours that followed.

They have also taken actions abroad: in 2017, group supporters chartered a ship on the Mediterranian in order to deter refugees from entering into Europe.

Additionally, the figurehead of the movement, Austrian Martin Sellner, is currently under investigation for his links to the Christchurch shooter who murdered 51 people in two mosques in March 2019.

Who are the Identitäre Bewegung?

The Identitarian Movement Germany, founded in 2012, currently has about 600 members. They describe the ideology of the movement with the term “ethnopluralism,” or a conviction of its followers that people of different ethnicities should not live in the same society.

The ‘Identitäre Bewegung’ is the German branch of the pan-European Identitarian movement. Originating in France with ‘Generation Identitaire’, the movement takes its leads from a number of ‘New Right’ thinkers such as Alain de Benoist, who reject the progressive changes that have occurred throughout Europe over the past twenty years. Instead, they advocate a range of nativist and traditionalist ideas.

The IB in Germany are particularly influenced by the 2013 text ‘Generation Identity’, written by Markus Willinger, an Austrian activist now studying in Stuttgart, and consider it their manifesto. Police broke up IB protesters who sat in front of the CDU headquarters in December 2016. Photo: DPA

What do you mean by ‘nativist’ and ‘traditionalist’?

The IB and their sister movements like to concern themselves with the idea of a specific national heritage and way of life under threat from a variety of ‘ills’, unleashed by the ‘baby boomer’ generation.

Their big bugbear is unchecked migration, particularly of the Islamic variety, though they also rail against what they deem ‘cultural marxism’ – the degeneration of society perpetrated by academics and other ‘establishment’ figures.

Haldenwang described the followers of the movement as “spiritual arsonists” whose intention was to “question the equality of human beings or even their human dignity per se”.

Would the IB describe themselves as right-wing?

Undoubtedly, although the IB will bend over backwards to disassociate themselves from Germany’s Nazi past, and indeed, many other Far Right German groups.

They describe themselves as a ‘non-violent movement’ that seeks to use public ‘actions’ to spread their message – most memorably draping a banner condemning Islam from the Brandenburger Tor.

That said, many anti-racism groups and watchdogs have described the IB as having disturbing parallels to fascist groups across Europe – even the Nazis themselves.

Their rhetoric certainly does echo some aspects of National Socialism’s ‘Blut and Boden’ – the idea that certain peoples are essentially and eternally linked to ancestral homelands, and that this is central to the functioning of society.

It also treats ‘Western’ or ‘European’ civilization as inherently superior to others, and sees it as under constant attack by both outsiders and elements within – a pillar of National Socialist belief.

Their rhetoric of ‘street patrols’, ostensibly to prevent violence from ‘Muslims’ or ‘the Left’ echoes the Sturmabteilung, or ‘stormtroopers’, of the twenties and thirties, that the Nazis used to intimidate their opponents, albeit on a far smaller scale.

Finally, their simple and stark iconography – the Spartan ‘Lambda’, yellow on black – used on flags, t-shirts, stickers, badges and other materials seems a deliberate throwback to many, towards the totalitarian symbolism of the 20th century.

Are they a large movement?

Not really, there are groups in most German cities, but they usually consist of a small circle of activists and the IB are far outnumbered by other Far Right groups. The difference is, the Identitare Bewegung are much savvier when it comes to the online world, and have a sophisticated network of websites, Discords and other platforms to communicate with one another.

Should Germany be worried?

Alert, but not alarmed. While the Constitution does grant them their due freedom of expression, they are closely monitored and scrutinized, and their ‘actions’ are more meant as provocation than anything else. More than other groups, a degree of skepticism and a sense of humour helps when coming across them.

Mike Stuchbery writes about the Far Right in both the United Kingdom and across Europe and works with several groups monitoring their spread and influence in a voluntary advisory role.