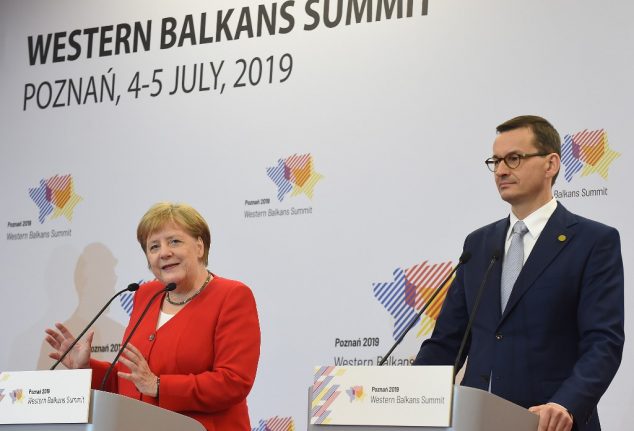 Their arguments came during a summit in Poznan, western Poland, that focused on western Balkan states after the bloc delayed setting a date to open accession talks with Tirana and Skopje.

Critics say that enlarging the EU further risks importing problems, pointing to ongoing corruption and justice issues in Romania and Bulgaria, two formerly communist states that joined the EU in 2007.

Supporters argue that turning down new members could push them towards powers such as China, Russia or Turkey.

German Chancellor Angela Merkel insisted that presenting Balkan states with the opportunity to join the EU was in the bloc's strategic interest.

“If we look at the geographical map, the states of the western Balkans are surrounded by EU member states ?- so this (opportunity for EU integration) is a strategic responsibility that is in our own interest,” she said as the summit wound up.

Poland is one of 11 formerly communist EU member states that have enjoyed strong economic growth and development since joining the bloc in 2004.

“By breaking its promises, the European Union is questioning the credibility of the whole community, which I deeply regret,” he told EU and Balkan leaders gathered in Poznan.

That “will be exploited by anti-Western circles and states seeking to weaken the Euro-Atlantic aspirations of the entire region,” he warned.

Poland's Prime Minister Mateusz Morawiecki also noted that presenting Balkan states with the goal of EU integration would “encourage close cooperation” and help those countries overcome lingering tensions rooted in past armed conflicts in the region.

EU Enlargement Commissioner Johannes Hahn said in June that he was “confident we'll get a green light in October” for talks with Tirana and Skopje but warned member states not to fall prey to “indecision and inaction”.