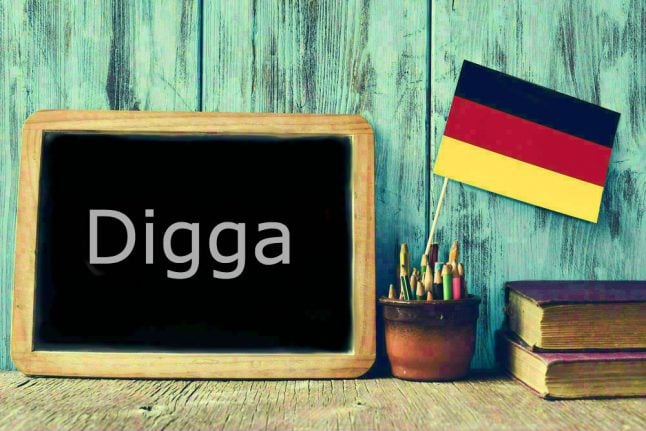 Digga is simply word you use when addressing a friend, like “mate”, “dude” or “bro”. It’s older variation, Dicker, technically means “fat guy” but the most common use if the term has nothing to do with weight.

Digga comes from Dicker, which is a very popular piece of slang originating from Hamburg. The exact origins of Dicker are said to trace back to the late 60s and early 70s; its first recorded use as an informal salutation was in Klaus Lemke’s 1972 film Rocker.

The most plausible theory is that it started off as a pet name used by Hamburg dock workers, most likely to describe “dicke Freunde” (literally meaning fat friends, but actually meaning close friends).

Dicker became popular through the Hamburg Hip-Hop movement during the 90s, mainly due to artists like die Absolute Beginner, Eins Zwo and Ferris MC frequently using the word. As the word spread throughout Germany, alternate spellings popped such as Digger and Digga, on the account that the “-ck” sound is similar to “-gg” when rapped quickly. The same is true for the “-er” and “-a” sounds. The Digga form is most popular than other spelling variations in Berlin, which is somewhat surprising as the hip-hop scenes of Berlin and Hamburg were originally somewhat hostile-minded towards one another.

As it is very much a part of German slang, its use is quite informal. You will most likely hear it being used (or use it yourself) as a greeting.

Digga is used throughout Germany, but particularly in Berlin. It is most popular with teenagers and younger adults. It’s use is frequent in German rap, or Deutschrap.

Bro, do you have time later or not?