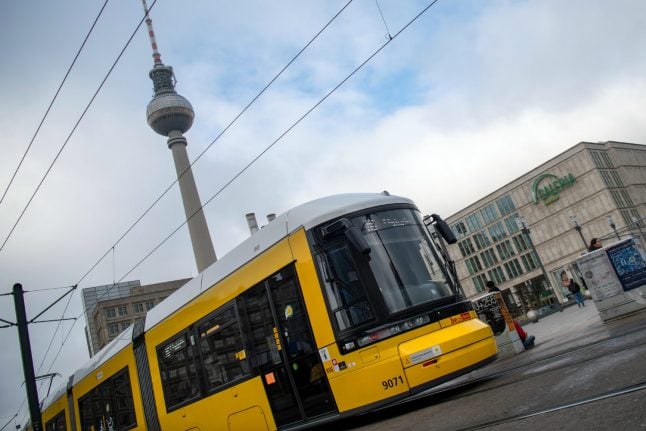 The bomb was discovered near to Alexanderplatz. Photo: DPA

The 100-kilogramme explosive was unearthed on a building site adjacent to the Alexa shopping centre at the central transport hub of Alexanderplatz in the city's east.

People were being evacuated from within a 300-metre (1,000-feet) radius of the corroded bomb, which had an intact detonator, police said.

It was expected that a bomb disposal squad would attempt to defuse the device later in the day on Friday. On Twitter police warned that nearby areas would remain blocked off.

The bomb find was expected to cause traffic problems on Friday evening and night, including on the S-Bahn lines S3, S5, S7 and S9 between Alexanderplatz and Ostbahnhof.

Almost 75 years after the end of World War II, Germany remains littered with unexploded ordnance, a legacy of the intense Allied bombing campaign against Nazi Germany.

Berlin was subject to a campaign of intense bombardment during the war, particularly in the spring of 1945, with a third of the city's homes destroyed and tens of thousands of people killed.

According to information from the local government released in April, there are still about 4,600 unexploded World War II bombs in Berlin.

Over the past two years, twelve bombs heavier than 50 kilos have been found in Berlin.

In the last few days, bomb squads defused two WWII bombs in Oranienburg, Brandenburg. Meanwhile, a bomb was defused in the Hermsdorf area of Berlin in May. Since parts of the S-Bahn lay within the restricted area, the company reported “massive traffic disruptions”.

In the biggest post-war evacuation to date, some 60,000 Frankfurt residents were evacuated in 2017 so that an unexploded 1.8-tonne British bomb dubbed the “blockbuster” could be defused.

SEE ALSO: Everything you need to know about WWII bomb disposals in Germany