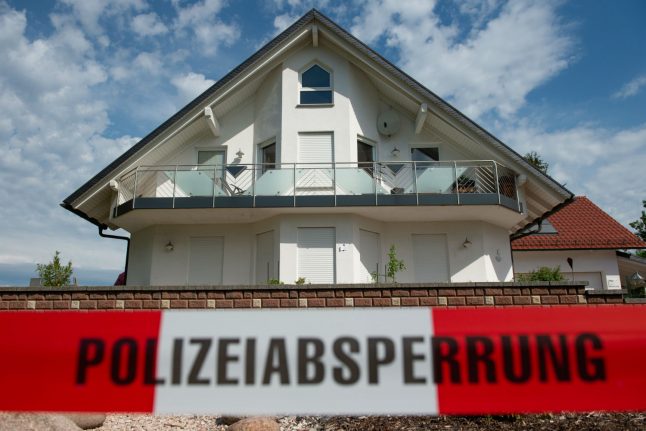 A police cordon in place at Waler Lübcke's home. Photo: DPA
“If someone is so hated, just because he had liberal views, that is the decline of human morality,” Germany's interior minister, Horst Seehofer, told the newspaper Tagesspiegel.
Police are investigating the murder last weekend of the prominent local politician, Walter Lübcke, a member of Chancellor Angela Merkel's centre-right Christian Democrat (CDU) party.
The 65-year-old was shot in the head at close range on the terrace of his home in Kassel, around 160 kilometres northeast of Frankfurt, just after Saturday midnight.
Investigators say it is unclear why Lübcke was killed, but a possible political motive has not been ruled out, given the politician had previously received numerous death threats.
READ ALSO: Politician in Hesse killed with shot to the head Walter Lübcke. Photo: DPA
Tributes to Lübcke and articles reporting his death sparked an avalanche of comments on social networks, many welcoming the murder – something that President Frank-Walter Steinmeier has slammed.
“It is simply repugnant to see how some people in the social networks are making fun of this man's death – welcoming it and applauding it,” Steinmeier said at an event in Dortmund.
“Slander and attacks, hate campaigns and physical violence against officials and mayors can not be justified.”
Lübcke, the head of regional government in Kassel, had spoken out in defence of migrants at the height of Europe's refugee crisis in 2015, drawing the fury of the far right.
On a visit to a refugee shelter in October 2015 he said helping people in need is a basic Christian value.
“Whoever does not represent these values can leave this country at any time if he does not agree. That is the freedom of every German,” he said back then.