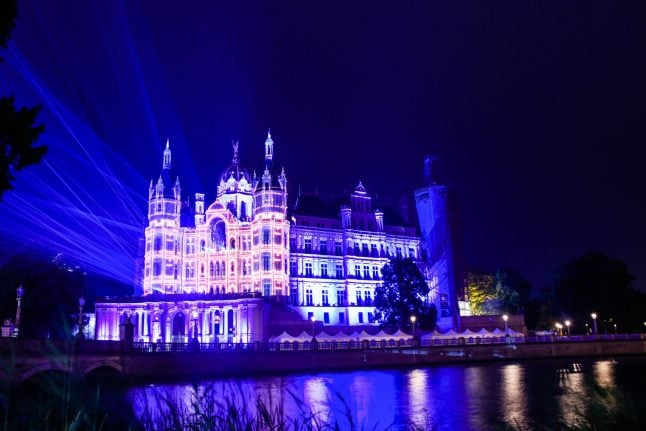 Schwerin's impressive castle lit up during the 2018 Schlossfest. Photo: DPA Beelitz may only be a small town in Brandenburg with a population of just over 11,000. But it’s known across the Bundesrepublik as a core grower and supplier of Spargel (asparagus), that beloved vegetable that has whole menus devoted to it during the Spargelzeit.

As the season comes to an end in June, the Spargelstadt hosts a huge family-friendly festival complete with cook-offs, dancing and music and, yes, a giant Spargelman walking around to greet visitors. If you’re a jazz fan, you won’t want to miss Germany’s largest jazz festival, now in its 26th year. A full 68 artists by the likes of guitarist Nik West and swing saxophonist Harry Allen will be showing off their talent on 29 stages at diverse locations around the city, from cozy bookstores to historic buildings.

Thursday’s opening event, in which the Dominic Galea Quartet takes to the stage, will take place in the Düsseldorf’s stunning Rathaus, which dates back to the 16th century. People in period costumes took to the streets of Schwerin in the 2013 Schlossfest. Photo: DPA

The picturesque northeast German state of Mecklenburg-Western Pomerania tends to be underappreciated by tourists. But June is the perfect time to pay a visit to its capital, which is hosting a classy costumed festival in and around its impressive castle, often dubbed the “Neuschwanstein of the North.”

Visitors, many of which come decked out in period costume from the 19th century, can partake in a range of activities, such as an arts and crafts fair, a light and laser music festival at the foot of the castle and of course the yearly crowning of the “king and queen.” Women in Hamburg eating the summery treat along the harbour. Photo: DPA

Just like with asparagus, Germans go crazy over Erdbeeren when the summer season arrives. Several cities across the country fill with red strawberry-shaped stands or hold festivals devoted to the sweet treat.

But few are in as idyllic of a setting as Hamburg’s Rieck Open Air Museum, where visitors can watch traditional costume dances and taste a range of regional products, especially those with strawberries. Music lovers fill Mauerpark during one Fête in 2012. Photo: DPA

Having taken place each year since 1995, the free live music festival Fête de la Musique presents over 100 artists ranging from experimental percussionists to chamber musicians  in all corners of the capital.

No Fête would be complete without its core celebration in Mauerpark. Here, jam sessions will take place against a graffiti-sprayed backdrop. The celebrations officially end at 10pm but after-parties stretching into the wee hours of the morning make it a distinctly Berlin festival. Not only is Kiel Week the largest sailing event in the world, with over 2,000 types of boats, ships and sailboards taking part, it's also a sprawling open air festival that annually attracts some three million visitors from Germany and abroad.

What started out as a sailing festival in the state of Schleswig-Holstein's picturesque capital is now the biggest summer festival in northern Europe, replete with several stages of live music, stand-up comedy and an international food festival.

From rooftops to street corners across various neighbourhoods in Berlin, the city comes alive with the sound of music to mark the first day of summer on Thursday, June 21st. The Weinbergkirche in Pillnitz, one of the idyllic stops on the Elbhangfest's seven km stretch. Photo: DPA

There are few places as picturesque to ring in the first days of summer as along the Elbe River, which flows through Dresden, and its surroundings. Over 700 events are taking place along a seven kilometre stretch, which also goes through the surrounding villages of Loschwitz, Wachwitz and Pillnitz.

The event kicks off with a fun opening day parade, and each day is filled with music, regional food and tours of local architectural gems, such as the Weinbergkirche in Pillnitz.