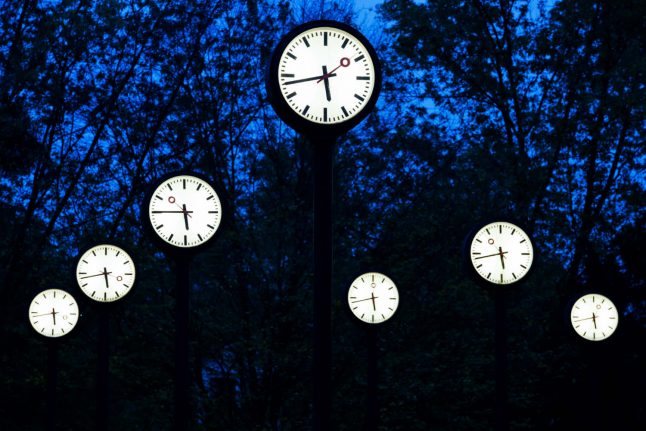 A clock exhibit in Düsseldorf during fall 2017. Photo: DPA

Starting on June 1st, Germany is tightening its rules on knife laws. In particular, fixed knives with a blade length of more than six centimetres will no longer be allowed in heavily frequented locations. Up until June, Germany only had a ban on knives over twelve centimeters long.

The country is, however, planning exceptions for craftsmen who need a knife for their jobs – a bill of which is currently being drafted in the Bundestag.

All trainees in Germany are also slated to receive an increase in their training allowance, up from €60 to €90. By June 1st, 2020, this will once again rise by €90.

Furthermore, all 15,000 steel workers in the state of Saarland will be receiving a raise of 3.7 percent of their current salaries. Starting from 2020, all employees will furthermore receive an additional 1,000 per year, which can be converted into an additional five days off from work. First it hit several states around Germany, and now the capital: Berlin is banning diesel cars with exhaust emissions standard 1 to 5 from 15 road highly trafficked road standards, with the ban set to full go into effect by the end of the month of June.

The eastern state of Saxony has introduced a new law for kindergartens (known as kitas), which is intended to improve the quality of education for children and save parents some hard-earned cash. It stipulates that starting in June, kita teachers will be able to spend two hours a week on preparation away from the classroom.

In addition, parents will be required to contribute less for after-school care, while municipalities will receive higher subsidies for day-care purposes at the same time. The new law will cost the Free State a little: Saxony plans to provide €75 million each year until 2021 for the improvements. A teacher reading to students at a kita in Dresden. Photo: DPA

Some people are worried they will pose a danger to pedestrians, but a speed limit has been set at 20 kilometres per hour to (try to) avoid this.

SEE ALSO: E-scooters get the green light on German roads

Security personnel to be recorded in a guards' register (Bewachregister)

Starting on June 1st, security staff working in sensitive locations such as asylum seekers' hostels, airports or major events will be registered in a central guards' register.

This register, which is maintained by the Federal Office of Economics and Export Control (BAFA), will also be used for the mandatory inspection of security guards at the Office for the Protection of the Constitution (Verfassungschutz). This is to ensure that only reliable personnel work in these areas.

Starting on May 31st, the so-called Cap Boundry Regulation (Kappungsgrenzenverordnung) expires in the state of North Rhine-Westphalia. The rule, stemming from a coalition agreement between the Christian Democrats (CDU) and Free Democrats (FDP), states than landlords can only raise the rent by a maximum of 20 percent within three years.

However, individual counties decided that the rent in certain areas can only go up by 15 percent during this time – Düsseldorf, Cologne, Münster, Detmold und Arnsberg all abided by this. Now the state is looking to renew the regulation.

SEE ALSO: The places in Germany where rent is rising rapidly

Amazon fees going up (and down in some departments)

Starting on June 5th, almost all articles sold on Amazon.de will be subject to a sales fee of at least 30 cents. However, a few categories will be exempt from this surcharge – namely books, music, videos, DVDs, software, video games, video game consoles, food, beer, wine and spirits. Eurowings doing away with free snacks

To the disdain of hungry passengers abroad, Eurowings economy class flights, the Lufthansa daughter airline, will be getting rid of the free snacks and drinks for all flights booked from June 4th onwards. The change will apply for all short and medium length flights.

The rules for hand luggage are also changing: not only will passengers in the economy class (the so-called Basic Tariff, or fare) have to part with their free coffee, but also with their hand-luggage on heavily booked flights. They’ll be able to check it in without a fee before getting on board.

Starting at Munich’s airport on June 1st, there will also be two boarding groups: economy-class passengers queue after passengers from the other, higher paid grounds have gotten on board. The change will gradually be rolled out at other airports. Handball fans, take notes (we know there must be some among you): the International Football Association Board (IFAB) has decided to alter rules: From June 1st, any goal scored with a hand or arm will be considered a foul, whether or not it was intentional.

A player can also be punished if he gets into possession of the ball with his hand or arm and thereby gains a clear advantage – for example scoring a goal afterwards.

By some calculations, handball is more widely played than even football in Germany. An easy explanation is that every Dorf, or small village, has a gym or at least Verein (association), but not everywhere has a football stadium.

SEE ALSO: How living in Germany turned me into an athlete