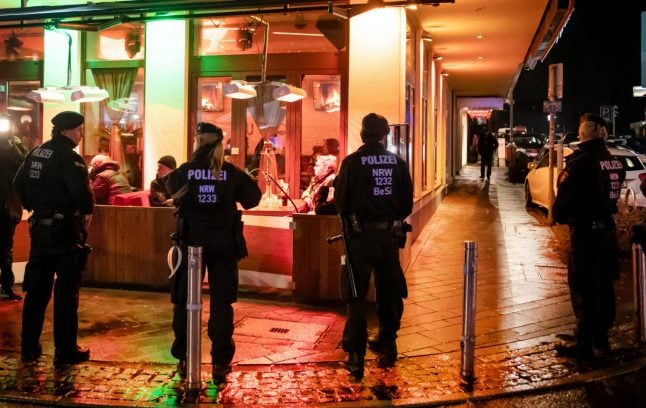 Police officers secure a shisha bar during a raid by customs and police in Bochum in January 2019. Photo: DPA

A total of 14,225 offences committed by crime gangs in North-Rhine Westphalia (NRW) were logged between 2016 and 2018, according to new figures revealed on Wednesday.

It's the first time the State Criminal Police Office (LKA) and interior ministry have unveiled the scale of the problem of criminal clans in NRW.

The LKA said 104 gangs are active in the western German state, and that every third member is a German national, reported local paper the Rheinische Post.

Known in the German media as “clans”, whose founders fled war in Lebanon in the 1980s, members of these criminal gangs are said to be involved in several illegal activities, such as the drugs trade.

While other forms of organized crime, as well as homegrown German biker gangs, are also active, the clans are known to be especially visible, given many members' love of gangster bling and big cars.

According to security authorities, there are around 6,500 people who belong to clans in NRW. However Thomas Jungbluth, chief criminal director at the LKA, was keen to point out that not all members of families with links to crime were criminals.

A series of raids has taken place across the region in recent months, focusing on shisha bars, cafes and gambling venues.

According to the 30-page report, a total of 6,449 people were identified as suspected clan members. The investigators believe, however, that this could be the tip of the iceberg because there is a high number of unreported cases.

Two clans account for about 20 per cent of all crimes. About a third of all crimes is carried out by so-called repeat offenders. Between 2016 and 2018 figures show they were 24 cases of attempted homicide, with two victims being killed.

Meanwhile, 20 percent of the suspected clan members are women. “That surprised us,” Jungbluth said.

It is also worth noting that 36 percent of the suspects are German citizens.

“This is the generation that was born here,” said Jungbluth. “They are much more aggressive, they show off on the streets.”

Around 31 percent of those suspected of being in gangs are Lebanese, and that’s followed by Turks (15 percent) and Syrians (13 percent). The remaining five percent of the suspects are either stateless or there is no information about where they’re from.

Essen has most criminal members

Clan crime continues to affect the Ruhr region in particular, investigators said. Essen is the city with the most criminal members, followed by other cities in the Ruhr area. But the Mettmann area (in between Düsseldorf and Wuppertal) is also affected.

According to the LKA, the clans engage in drug trafficking, gambling and social benefit fraud as well as legal business such as car dealership, security services (especially bouncers) and locksmiths.

“These are already mafias and parallel worlds in which disregard for law and order is passed on from one generation to the next,” NRW interior minister Herbert Reul, of the centre-right Christian Democrats (CDU) said.

According to the findings of the LKA, the clans in NRW maintain contacts with other large criminal gangs in Bremen, Lower Saxony and Scandinavia (Sweden and Denmark) as well as with the notorious gangs in Berlin.

Figures on the scale of the problem will be updated and checked regularly, the interior ministry said. Reul also vowed to continue the crack down on gangs.

“For years, citizens' comments on this problem were ignored,” said Reul. “This is finally over.”