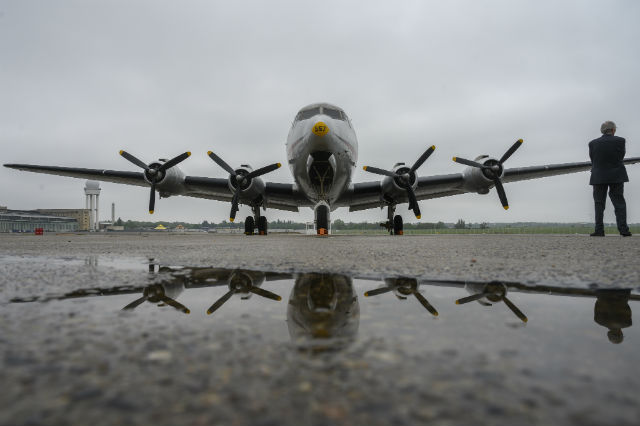 A vintage Douglas C-54 aircraft, contemporary of those used in the Berlin Airlift, affectionately called "Candy Bombers". Photo: John MacDougall / AFP
Mercedes Wild, now 78, recalled how she protested that the constant drone of airlift planes disturbed her chickens — and during the Soviet blockade of West Berlin, eggs were a valuable commodity.
Then Gail Halvorsen, the US pilot who dreamed up the candy drops, wrote back, enclosing sticks of chewing gum and a lollipop with his letter. His gesture sparked a long-lasting friendship between
Halvorsen, Wild and their families, she told AFP. “It wasn't the sweets that impressed me, it was the letter,” she said.”I grew up fatherless, like a lot of (German) children at that time, so knowing that someone outside of Berlin was thinking of me gave me hope.” “Candy bomber” Halvorsen insists that the real heroes of the Berlin Airlift — the mammoth logistical operation to air-drop supplies into West Berlin after the Soviet blockaded it — were inside the city.
“The heroes of the Berlin Airlift were not the pilots, the heroes were the Germans — the parents and children on the ground,” said the American veteran. “They were the stalwarts of the confrontation with the Soviet Union, not the guys bringing in the food, it was the people (of West Berlin) standing up for themselves.”
Sunday marks the 70th anniversary of the end of the 15-month Soviet blockade.
'Uncle Wiggly Wings'
The frail 98-year-old ex-pilot was back at Berlin's former Tempelhof airport for the festivities to remember the operation by the western Allies in 1948-49.
Halvorsen is guest of honour at Sunday's festival to mark 70 years since the lifting of the Soviet blockade which sparked 'Operation Vittles', as the Berlin Airlift was officially known. It flew in supplies to West Berlin's 2.5 million population amid cold war tensions in Germany's ruined capital, still reeling from the Second World War.
Operating almost non-stop and through the harsh German winter, the Airlift carried more than two million tonnes of supplies on more than 277,000 flights, mainly into Tempelhof.
At least 78 US, British and German pilots and ground crew lost their lives in accidents in the air and on the ground, as the Allies delivered fuel and food to prevent Berlin's population from starving.
It was the first major salvo of the Cold War. “It's not for us, it's in memory” of those “who gave their lives,” said US veteran Ralph Dionne, 91, who was a flight engineer during the airlift.
Halvorsen was the first American pilot to famously drop bundles of chocolate with handkerchief parachutes to children waiting below.
To signal that he was about to release the candy-laden parachutes, Halvorsen would dip his plane's wings, earning him the nickname “Uncle Wiggly Wings”.
Halvorsen rose to the rank of colonel and eventually ended up commander of the airfield.
'Best ambassador'
Tempelhof closed as an airport in 2008 and is now a public park.
The veteran flew from his home in Utah to throw the honorary opening pitch on Saturday as the Berlin Braves, the city's baseball team, named their ground “The Gail S Halvorsen Ballpark” on the former airport site.
After handing out candy to local children, Halvorsen urged “future leaders” in both Germany “and America” to protect their freedom.
“I would exhort the young people to keep an open mind to know that some leaders will lead free people in the wrong direction,” Halvorsen warned.
“They need to use their judgement about what they believe in the news, that they need to make their own decision on who rules them.
“Freedom is important and sometimes you have to fight for it.
“That's why we came on the Berlin Airlift, to help people make their own decisions.”
The frail American is still a hero in the German capital. Mercedes Wild still has Halvorsen's first letter to her in its original envelope.
“He became a father-figure for me, our families have a special bond, and he's the best ambassador we could have for German-American friendship.
“He's a lovely, kind person, who only sees the best in people and finds it hard to say 'no'.
“It's impossible to describe the scale of the help western allies organised for us in 1948-49 and it is something we have to pass on” to future generations, she said.
“He's an angel for Berlin,” said Douglas Brown, who helped organise the baseball event.
“Angels bring messages, he brought hope and joy.”