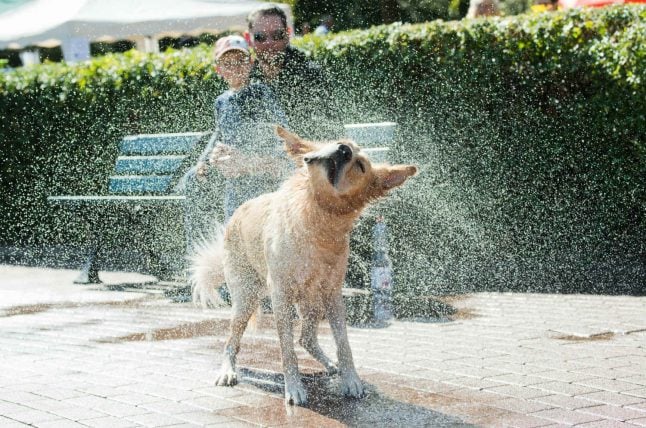 Although the phrase is about accepting someone the way they are, it could also take quite a literal meaning in Germany, a country that has more than a soft spot for its canines.

You only have to wander down the street, wherever you are in the country, to see doting dog owners walking their pugs, Labradors, mixed breeds – or whichever four-legged friend has won their heart.

You’ll probably even see a fair few happy Hunde with tongues hanging out, racing alongside a bike, while smaller dogs are often tucked securely into little baskets like toddlers on the front of the bicycles.

Figures from 2017 show there are 9.2million dogs in the country, the highest number in Europe, followed by the UK and then Poland.

That isn’t surprising given that Germany has more than 82 million people – and, of course, dogs are known in many cultures as being man’s best friend – it’s not only a German thing.

However, when you look more closely it's clear that hounds are a big part of life in Deutschland.

Pedi Matthies who lives in the Upper Middle Rhine Valley, would describe herself as a serious dog lover – she even founded a business to reflect her passion. The 50-year-old launched Hundenerd, which specializes in dog products like harnesses and provides pet owners with advice, in 2014.

Matthies, who has two dogs, says the country's connection to canines could be connected to one of its residents' favourite pastimes – getting outside and enjoying fresh hair.

“I think the Germans are a little obsessed with their dogs because it gives them the possibility to get in touch with nature and with their emotional side,” Matthies told The Local.

“This is something we really need badly especially in these current times.”

Matthies says dogs have a “strong social factor in Germany” and are “simply good for the German soul”. Canines take a starring role in German culture, and have done so throughout history.

German writer and playwright Carl Zuckmayer said: “A life without a dog is a mistake”, while Frederick the Great of Prussia once said: “the more I see of men, the better I like my dog.”

Meanwhile, Otto von Bismarck, the first chancellor of the German empire, was a great lover of dogs and was owner to several Great Danes throughout his life. His dog was known as the ‘Reichshund’ (dog of the empire).

“Breeds such as the whippet, pug, spitz and poodle became popular in the 18th century,” says Matthies.

Owning dogs was becoming more fashionable in German society around this time. The German Shepherd Society was founded in 1899 and experienced a “rapid rise in popularity,” says Matthies.

Dogs were also used in both wars and even for “propaganda purposes,” says Matthies. It could even be said that the presence of Blondi, Hitler’s German shepherd, was a PR move to make the dictator appear more human.

After the war, in 1948, the German Shepherd Society was relaunched and now there are a huge range of dogs across the country used for a variety of reasons, from pets to guide dogs.

Aside from the fun part of owning a dog, the rules involved show that Germany takes the whole business very seriously.

Let’s look at the Hundesteuer. When you walk into any Finanzamt (finance office) across the country, you’ll spot the sign for dog tax almost immediately. The amount you pay to own a dog depends on where you live.

In Stuttgart, there are separate taxes for dogs and those deemed dangerous (such as American pitbull terrier), ranging between €35 and €144.

Meanwhile, in Hamburg the tax is around €90 per year for non-dangerous dogs.

“There are also different local laws that you have to be aware of,” Matthies says.

“You need to know whether your dog needs to be on a leash the whole time or part time (during mating season, for example). Germans also want to protect the wildlife.”

In some states you have to take an exam at the vet to prove you’re capable of handling a dog.

Dog training is also taken seriously. Matthies say that this tradition “came out of military purposes”. Although there are different ways to train canines now, it is still frowned upon if a dog doesn’t behave itself.

“There’s a lot of serious discussion about that in Germany,” says Matthies.

Imagine a world where an animal could accompany you everywhere. To work? No problem. The pub? Absolutely fine.

Well, that’s pretty much the case in Germany. Of course, there are some places where your dog might have to wait outside (the supermarket is still dog free) but it’s quite acceptable to cart your four-legged friend around with you elsewhere.

“People love to take their dogs everywhere in Germany, in comparison to say, America or the UK,” says Matthies.

Filip Jankowski, a chef originally from Poland who lives in Berlin, takes his Italian greyhound called Szczepan (pronounced sheppan) to work every day. The five-years-old Szczepan can be found tucked into the back room of the bar that Jankowski works in. The 27-year-old is then able to spend time with his pooch during quiet spells in the kitchen and take him out for fresh air.

“Germany is a good place for dogs,” says Jankowski. “People treat dogs very well, and the animals are quiet and chilled.

“I always take him (Szczepan) into work with me and he’s happy about that. He can sleep near me in the back room while I work”

Jankowski adds that he always has lots of offers of help if he needs someone to take care of his dog, a sign that dogs are welcome in society.

A particularly interesting tradition in Germany which sums up the country’s deep attachment to canines is dog swimming pool day.

At the end of the outdoor swimming season, usually around mid September, many pools across the country are opened up to the nation’s Hunde so they can enjoy a splash around. Pictures of gloriously happy pooches paddling in pools fill local newspaper pages up and down the country. In some pools, the animals can also be joined in the water by their owners.

Organizers of Trebur outdoor pool in Rüsselsheim am Main said around 500 guests and their dogs came to their Sunday dog day on September 16th, according to the Main-Spitze newspaper.

“The nice thing about Trebur is that the owners can go swimming with their dogs. This is not common in other outdoor pools,” said bath manager Elke Sparkuhl.

Dogs are also doted over in the winter: at the an annual Christmas market for dogs in Berlin's Grunewald, vendors sell everything from dog sweaters to edible treats – with a few extra goodies set aside for their owners.

Another testament to dog culture in Germany is the Dackelmuseum in Passau, the world’s first museum devoted to the wonders of the wiener dog, also known in English as a sausage dog

One of Germany’s oldest breeds, the dachshund can be long, short or wire-haired and is one of the country’s most popular dogs.

Bred for hunting since the Middle Ages, dachshund translates literally as ‘badger dog’ and their long snouts allow them to burrow into holes to catch small animals.

The founders, Josef Küblbeck and Oliver Storz, themselves owners of two dachshunds, display around 2000 exhibits, from dog-shaped bread to a giant golden statue, in the rooms near the cathedral in the southern German city.

At the opening earlier this year, dog owners flocked to the museum from all over Germany with their pets in tow.

Visitors from all over the world who love the ‘Dackel’ often sport dachshund-themed clothing and jewellery on their trip to the museum. The sausage dog can also be found in the back window of many German cars, in the form of the ‘Wackeldackel’ or nodding dog.

What can the world learn from Germany when it comes to dog care?

Germany’s reputation for how it treats its dogs has travelled further afield.

The Tierschutzverein Berlin, the biggest animal shelter in Europe, runs several projects and also campaigns for animal rights. It is currently looking after 260 dogs and 600 cats, according to spokesperson Beate Kaminski.

Kaminski says that Germany is known throughout the world for having a “high standard of care for dogs, and higher than many other countries”.

“We have people who come to visit our animal shelter from Korea, Japan, Romania and other countries to see how we treat dogs here,” says Kaminski. “They arrange to come and they ask for advice, they want to know how we look after dogs in Germany.”

Kaminski points out that there are people who mistreat animals throughout the country otherwise the shelter, and others like it, wouldn’t have to exist.

“But there is generally a lot of respect for animals, especially dogs and high regard for animal care in Germany,” she says.