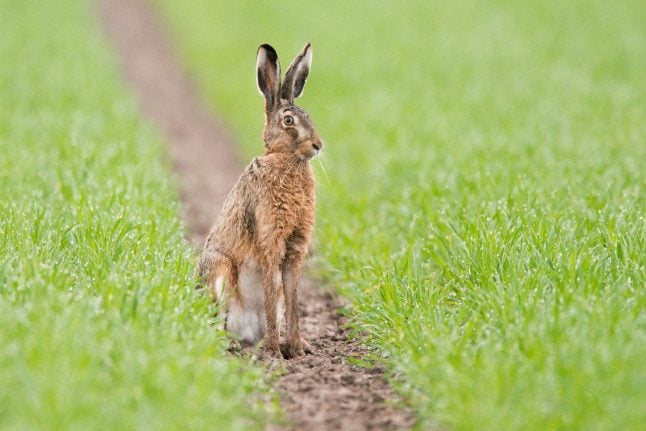 Let’s start this off with a song that might get stuck in your head: Around Easter each year, German children are very likely to sing “Stups, der kleine Osterhase” (“Stups, the little Easter Bunny.”)

It’s a song about a clumsy bunny, which messes up the hiding places of the Easter eggs.

Here’s a version of the song, sun by famous German singer-songwriter Rolf Zuckowski.

And with this, we can start getting into the history of the Osterhase. Osterhase is, like its English equivalent, a combination of the words Ostern (“Easter”) and Hase (“bunny.”)

“Easter” and the German Ostern have a similar ring to them. That is because they probably have the same origin: A combination of the Old High German Ôstarûn, as well as the Old English word ēastron.

Both are thought to date back to the Indo-European word ausos, which means “dawn.” The sun rises in the East (Osten in German). Ostern is now believed to link to that dawn – probably because of Jesus’ believed resurgence on Easter Sunday.

But why exactly does the Hase bring the eggs around Easter, you ask?

While there aren’t really any official documents proving that, a lot of entries can be found online that link the Easter Bunny to the Byzantine animal symbols. There, a bunny symbolises Jesus Christ.

Because a bunny allegedly sleeps with its eyes open, it represents the resurged, who will never pass away (entschlafen in German, which translates to “sleep away”) again. Also, bunnies are known to have loads of offspring each year and therefore symbolise fertility, which can also be linked to resurrection and a new beginning of life.

Additionally, eggs are a symbol for birth and new life as well, which may be why the Osterhase brings Ostereier (“Easter eggs.”)

So, now that you know about the origins of the words Ostern and why there even is an Osterhase, go outside and hide some treats for your children – while humming “Stups, der kleine Osterhase,” of course. When does the Easter bunny finally arrive and hide the eggs?

I don’t believe in the Easter Bunny anymore.

Why is it called “Easter Bunny”? Bunnies don’t lay eggs after all.