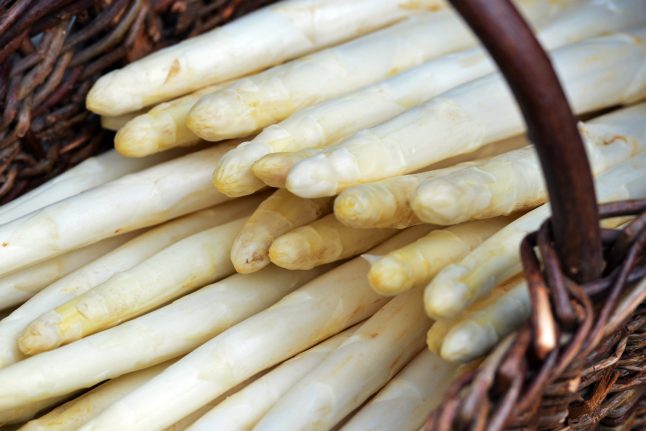 Whenever you enter a German supermarket or farmer’s market in spring, you’ll see signs along these lines everywhere: FRISCHER NÜRNBERGER SPARGEL! (fresh Nuremberg asparagus!) It might seem a bit aggressive – and to be fair, sellers urging you to buy Spargel can seem over-the-top, too. But that’s how spring works, vegetable-wise.

You might look at your screen now and wonder what I am talking about, so let me translate: Spargelzeit simply means asparagus season. Why is that worth a word of the day, you ask? That’s simple: Germans are obsessed with asparagus. People have been eating cabbage and potatoes all winter and asparagus means that spring is here. Hence, when the season starts each year, you are guaranteed to find asparagus everywhere.

Some statistics to prove my case: When you google “Spargelzeit 2019”, you immediately find 292,000 results. A lot of them are about asparagus recipes or where you can buy it cheaply.

According to the Information Centre for Agriculture, the total consumption of asparagus in 2015 was about 123,000 tons of the vegetable. That means a consumption of 1.5 kilograms per capita.

When asparagus season begins, Germany loses its mind: There are even beauty competitions to find the next asparagus queen of the region, and you can basically find asparagus at every turn: In restaurants, salad bars even smoothies or sushi.

Most traditional German restaurants will sell white asparagus during the season. It is traditionally cooked, then drenched in either butter or Hollandaise sauce, and served with boiled potatoes and some slices of ham.

While white asparagus is still the most popular one in Germany, the green type is actually growing in popularity: In 2012, the consumption of green asparagus was about six percent of the total consumption. In 2017, there was an increase to about 11 percent, according to the Agrarmarkt Informationsgesellschaft (AMI). The hype mainly centres on white asparagus though, according to German newspaper Die Zeit.

So the next time you visit a farmer’s market and somebody shouts “KAUF MEINEN SPARGEL” (“Buy my asparagus”) in your ear, don’t feel attacked. Just remember: It will be over by the end of June, so consider eating as much asparagus as you can.

I think asparagus season is usually rather stressful.