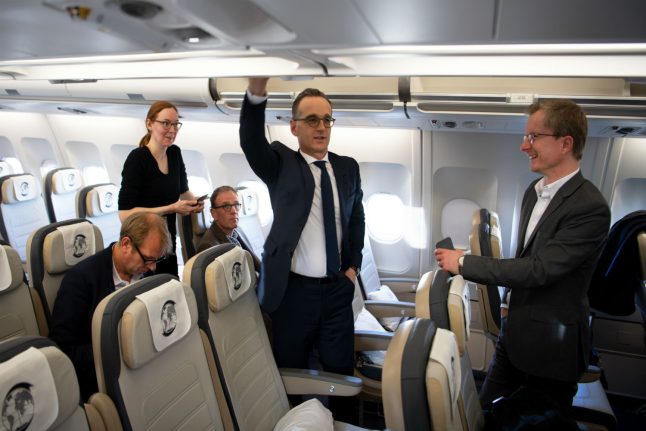 Maas departing the 'Konrad Adenauer' Airbus after its landing on Monday. Photo: DPA

A German government airplane that broke down and forced Chancellor Angela Merkel to delay her trip last November to a G20 summit, on Monday blew a tyre on its first flight after a four-month overhaul.

In the latest of a series of defects plaguing German government planes in the past few months, the “Konrad Adenauer” Airbus carried Foreign Minister Heiko Maas safely to New York, but one of its tyres burst upon landing.

The plane had to be towed to a parking space, with the delay forcing Maas to miss his first appointments while Germany was due to assume the presidency of the UN Security Council, said an AFP journalist on board the flight.

An appearance with French Foreign Minister Jean-Yves Le Drian had to be  pushed back. The opening of a meeting at the Security Council on protection of
humanitarian workers took place without Maas.

Just a month ago, the foreign minister was stranded in Mali due to a hydraulic problem with his Airbus A319's landing gear.

A Luftwaffe (air force) Airbus A340 had to travel from Cologne to fetch him back to Germany.

Maas' latest plane woes hit the aircraft that was forced to land in Cologne because of electrical problems in November while carrying Merkel to Buenos Aires.

Merkel missed the beginning of the G20 summit as a result.

At the end of January, President Frank-Walter Steinmeier was stuck in Ethiopia for similar reasons while Development Minister Gerd Mueller had to cancel a trip to Namibia at the start of the year owing to problems with his plane.

Berlin is looking into buying new planes over the coming years to replace an ageing fleet.