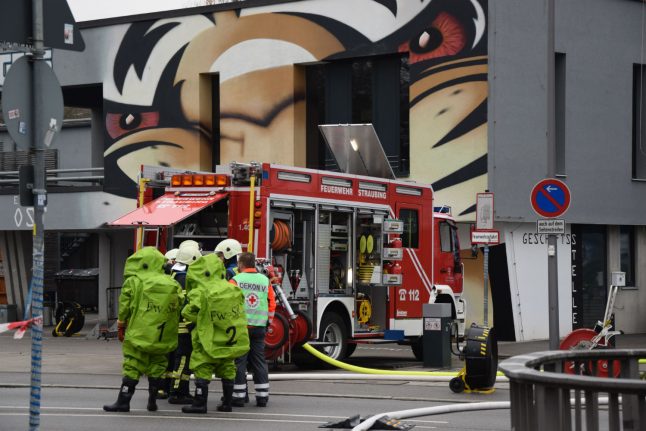 Emergency forces wear protective clothing in front of the ice rink in Straubing. Photo: DPA
Roads are closed while nearby homes and a school have been evacuated following the leak. Emergency services are at the scene of the ice stadium in Straubing, which lies south-east of Regensburg.
According to broadcaster BR24, a pipeline in the building had been damaged during construction work, causing ammonia gas to leak out.
At least 60 people have been injured in the accident, including firefighters. According to police, those injured have been experiencing irritation to the eyes and respiratory difficulties.
A nearby school was evacuated, reported BR24. A total of 118 pupils had to leave the building and were taken to other schools in the city. About 80 local residents in the area were also evacuated from their homes.
Police warned of the smell and advised local residents to keep windows and doors closed.
Streets and car parks around the stadium are currently closed. Drivers have been warned to avoid the area. According to the police, roads will be closed until 4 pm.
City authorities have set up a citizens' helpline, which will give residents up-to-date information and advice.
The fire brigade has set up various measuring stations in the vicinity of the ice rink to measure the concentration of harmful substances in order to rule out any danger to the population.
Ammonia can be life-threatening
Ammonia, a pungent smelling gas, is often used for industrial purposes. Exposure to high concentrations of ammonia in the air causes burning of the eyes, nose, throat and respiratory tract and can result in blindness, lung damage or even death.
Inhalation of lower concentrations can cause coughing, as well as nose and throat irritation.