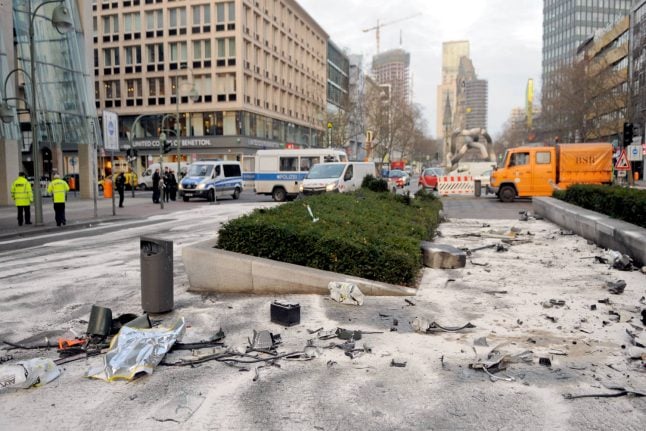 Pieces of the hit jeep following the incident on February 1st, 2016. Photo: DPA

The first conviction had been overturned by the Federal High Court, who said that there wasn’t enough evidence of an intent to kill.

The now 30- and 27-year-old drivers, who raced through the western part of the city at speeds of up to 170 kilometres per hour, admitted to the death of a 69-year-old man.

“What happened had nothing to do with negligence,” said the presiding judge on Tuesday. “The defendants have played with the lives of other people for no reason.”

As the two men sped down Berlin’s famous Kurfürstendamm (often shortened to Ku'damm), the 30-year-old driver had ran through a red light and rammed into the jeep of the pensioner, a retired doctor and father of two, who died in his car.

The jeep had been hurled through the air for metres. The two speeders, on the other hand, did not sustain major injuries.

“People who ruthlessly abuse our streets for their selfish purposes must feel the full force of the rule of law,” said Interior Senator Andreas Geisel (SPD) in a first reaction to the ruling. “If the car becomes a weapon, the state must intervene and take the threat off the streets.

Since October 2017, people who take part in illegal car races can be more severely punished. But now there will be a new addition to the criminal code, which states that If the death of another person is caused by a “forbidden car race”, up to ten years' imprisonment can be imposed.

In February 2017, for the first time in Germany in a speeding case, another criminal chamber of the Berlin Regional Court had sentenced both men to life imprisonment for murder.

However, the Federal Supreme Court (BGH) found the conditional intent to kill insufficiently justified. The verdict was reversed and a new hearing ordered.

According to statistics, the police in Berlin investigated 298 illegal car races from the beginning of the new regulation (October 2017) until the end of 2018.