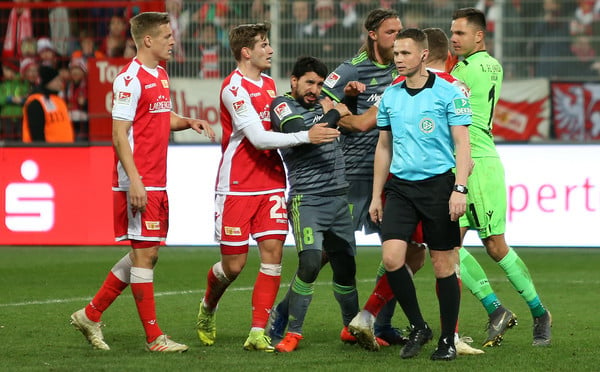 The offensive tweet came after Cohen (middle, #8) received a red card. Photo: Andreas Gora/DPA
In a profanity-laced insult, an apparent fan of FC Union Berlin tweeted that Almog Cohen, captain of opposing team Ingolstadt, should disappear into “the chamber”, a reference to the gas chambers used by the Nazis to kill Jews during the Holocaust.
The tweet was posted after Cohen received a red card during Friday's match in the German capital, which Union Berlin won 2-0.
Both football clubs immediately condemned the abuse, with Union Berlin swiftly filing a complaint with police for incitement to hatred.
“I'm ashamed of such Union fans,” club president Dirk Zingler said in a statement. “FC Union stands for humanistic and democratic values. Anyone who doesn't share these values has no place in our club or our stadium.”
A Berlin police spokeswoman told DPA news agency that the state security service, which deals with politically motivated crimes, had opened an investigation.
The rant unleashed an outpouring of support for 30-year-old Cohen, who also plays for the Israeli national team.
“Almog, you will never be alone!”, tweeted the Israeli ambassador to Germany, Jeremy Issacharoff, condemning the “despicable” anti-Jewish insult.
Christoph Heubner, vice-president of the International Auschwitz Committee, said the hate-filled tweet underscored a worrying rise in anti-Semitism in Germany.
Such “outbursts of hatred” are “disgusting and alarming, and not just to Holocaust survivors, because of their direct reference to the gas chambers of Auschwitz,” he said.
Cohen, who has lived in Germany for nine years, tweeted a message of thanks to his supporters.
“As a Jewish professional football player in Germany I just want to say: I am very proud of my heritage and of representing my country in the second division and being captain of Ingolstadt 04,” he wrote.
“A big thank you to my club which gives me the support and therefore the strength to master any situation.”