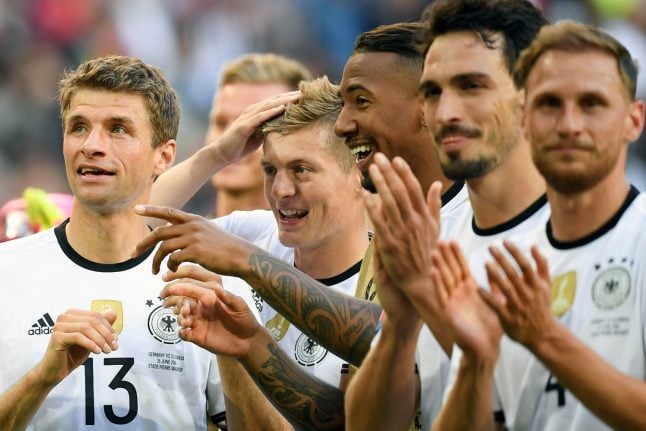 Müller. Boateng. Hummels. For a decade these names were among the first on any German team sheet. On Tuesday, German coach Joachim Löw announced that their time in the Deutschland shirt was done.

Löw, in announcing his squad for their upcoming match against Serbia, left the trio out. But this wasn’t a tactical switch or a move designed to encourage the players to train harder and force their way back.

Low thanked the three players for their service to the national team and for “many successful and outstanding years together”, also saying “this is the year for our new beginning” — a clear indication that their time was done.

The move shocked observers inside and outside of the football community, both due to the high profile of the players and the timing of the move. The three had made a combined 244 appearances for Germany.

The end of an era. ?? pic.twitter.com/9HOBuxeyYB

Despite calls for a clean out of the ageing squad after the 2018 World Cup failure, Löw had remained loyal to most of his golden generation. It appeared their spots were secure at least until the 2020 European Championships.

But things have changed. Löw, with a focus on the Euro 2020 tournament and the long-term future, saw few signs of the trio's poor form improving and felt the time was right to move on.

A pre-tournament favourite, Germany was expected to go far in the 2018 World Cup. Since their failure in the 2004 European Championships — just two years after making it to the World Cup Final — Germany had been to at least the semi finals of every major tournament.

While previous World Cup winners France, Italy and Spain had dramatically fizzled out when defending their title, the belief was that this would not happen to Germany.

Löw told star attacker Marco Reus that he wouldn’t be starting in Germany’s opening match to Mexico as he was being kept for the “important games” later in the tournament.

Three matches and two defeats later, Germany exited the World Cup at the group stage, the first time since 1938 that Germany had been eliminated in the first round. Never before had Germany failed to make it out of the group stage.

While their performances were characterized by more than their fair share of bad luck, the tepid and complacent nature of their play surprised many. Many of Die Mannschaft’s biggest stars — bulletproof through the qualifying campaign — looked to be running in quicksand.

As with any surprising and high-profile defeat, heads must roll.

Löw continued to be loyal to his 2014 champions, somewhat surprisingly holding onto his own job in the process. But with another major tournament just over a year away, Löw decided his star trio’s form slump wasn’t temporary.

Müller, Boateng and Hummels played crucial roles in Germany’s 2014 World Cup triumph. Each stayed on the field for the entire 120 minutes of Die Mannschaft’s victory in the final.

But few observers could argue that the trio are anything like the players they were at their peak. Whether at club or national level, their recent performances have been at best inconsistent and at worst disappointing.

Müller’s decline is perhaps the most surprising given he’s still only 29, but the writing has been on the wall at club and country level even before the World Cup.

Boateng’s decline is also surprising, given that he almost single-handedly kept Germany in the 2016 European Championship.

These days however the boy from Wedding in West Berlin warms the bench at his club side more often than not, kept out of the XI by Hummels who has also suffered a decline in form.

And while Löw’s statement couldn’t have been more final, don’t be surprised if Müller — who is popular with his teammates and a welcome presence in the dressing room — makes a Lukas Podolski-like return to the Euros squad, improving team morale but without playing a match.

Mesut Özil spoke out on Twitter in support of Boateng, saying the dismissal was handled poorly. He was notably silent however on Müller and Hummels’ dismissals, giving further weight to media reports of a split in the German dressing room.

I feel sorry one of the best German players of the last decades has to leave the National team in that way. ?? #Danke @JB17Official

Özil dramatically retired from the German national team in 2018, citing racism in the German Football Association as a primary factor.

As reported by The Local in 2018, Löw ruled out a return for Özil, saying there was “no chance” that he’d again be selected in the German team. On yer bike. Germany will need to replace three of the best players of their golden generation. Image: DPA

The future of German football

The three players are up there with some of the very best in German football’s proud history and will be difficult to replace. German football however is not short of talent and Löw obviously thinks he’s got the players at his disposal to fill the holes.

And while it may seem like an odd sentence to read for any football fan, goalkeeping remains an issue for Germany. Manuel Neuer was made captain by Löw in the lead up to the World Cup despite being injured for the best part of a year.

He’s yet to hit the form which made him Germany’s player of the 2014 tournament.

Breathing down his neck is FC Barcelona’s Marc-Andre ter Stegen, who just happens to be the world’s best goalkeeper at the moment. Despite being the only player in the Barcelona defence who is able to stop goals, ter Stegen continues to warm the pine at the national level.

While Löw would be reluctant to drop his captain, at the start of the week the same could have been said about Müller, Boateng and Hummels.

It remains to be seen whether or not the 32-year-old's form will improve, but with an excellent replacement waiting in the wings, Neuer's days might also be numbered.