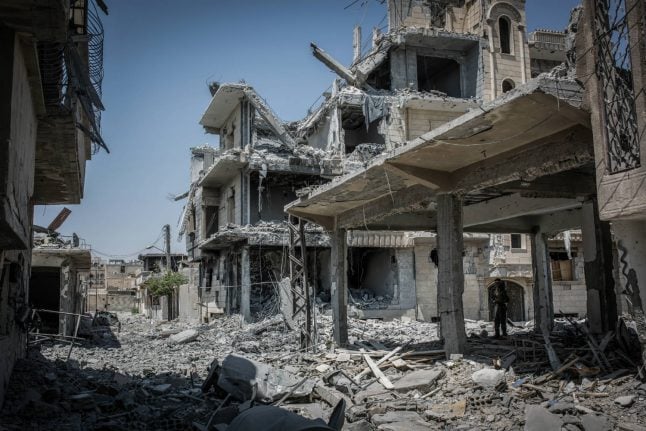 Syrian Democratic Forces (SDF) soliders search the ruins of a destroyed house in Raqqa, Syria in August 2017, during fighting with the terrorist group Islamic State (IS). Photo: DPA

AFP reported Lemke's capture last week after speaking to two of his wives who said they had fled together from the jihadist group's final pocket of territory in eastern Syria.

SEE ALSO: German jihadist detained in Syria by forces, according to his wives

IS is clinging to a tiny sliver of its once sprawling “caliphate” and many residents are fleeing and turning themselves in ahead of a final offensive.

A spokesman for the Kurdish-led Syrian Democratic Forces (SDF), Mustafa Bali, said IS fighters were hiding among the fleeing civilians.

“On a daily basis, we are arresting foreign IS fighters,” he told AFP, declining to provide further details on Lemke's arrest.

The SDF has captured at least 50 foreign IS fighters over the past three weeks, Kurdish foreign affairs official Abdel Karim Omar told AFP on Wednesday.

The SDF announced Lemke's capture in a statement posted on their website on Monday.

It said two other jihadists had also been captured, identifying them as Egyptian national Hussein Fardid and Saudi Arabian jihadist Salem al-Shamrani.

The three were detained following “two special operations” on January 25th and February 1st, it added.

Investigations published in German newspapers portray Lemke, who is believed to be 28, as an influential figure among foreign jihadists in Syria.

German newspaper Die Zeit reported in December 2017 that Lemke had arrived in Raqqa, then de facto Syrian capital of the jihadist proto-state, in November 2014 and joined the Hisbah (Islamic police).

He is believed to have later become a member of the feared “Amniyat” — the jihadist group's intelligence service.

Lemke's third wife, a German national who gave her name as Leonora, told AFP at a screening centre in the province of Deir Ezzor last week that Lemke, his second wife and herself had fled the fighting together.

“We gave up together,” the 19-year-old said in English, adding that Lemke arrived with her at the centre run by the SDF.

German government and forces 'not in official talks'

Kurdish authorities say they have in their custody hundreds of foreign male IS members.

They allegedly include several German IS members, such as Mohammad Haydar Zammar, a Syrian-born German national accused of helping plan the September 11th attacks, and 36-year-old jihadist Sufyan, who travelled to Syria in 2015 to join the group.

Suspected jihadists captured by the SDF are usually eager to be sent home. The Kurdish administration in northeastern Syria also wants to send the prisoners back for trial, but governments in their countries of origin are often reluctant.

The SDF and the German government “are not in official talks” to repatriate German jihadists or their families, the Kurdish foreign affairs official said, adding that Germany has not offered to repatriate its citizens.

More than 37,000 people, mostly women and children from jihadist families, have fled IS territory since the SDF, backed by the US-led coalition, intensified its offensive against the jihadists in December, according to the Syrian Observatory for Human Rights.

The Britain-based war monitor has said that figure includes some 3,200 jihadists.