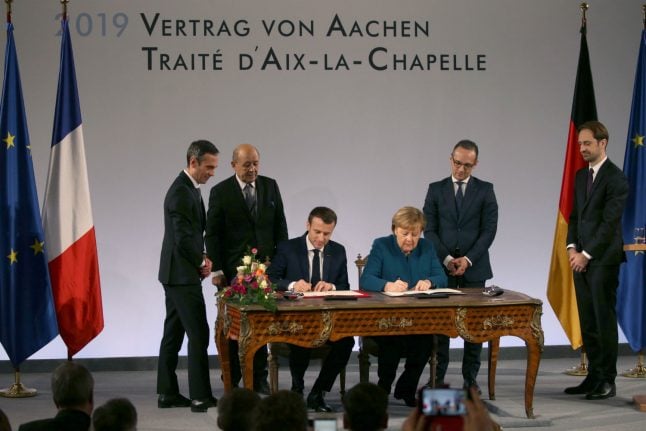 French President Emmanuel Macron in his speech charged that “those who… spread lies are hurting the same people they are pretending to defend by seeking to repeat our history”.

In a rare move, the Elysee Palace also issued a statement with four capital-letter “NONs” to shoot down the most inflammatory claims that made the rounds on social media.

“NO, Alsace and Lorraine will not be placed under the tutelage of Germany,” said the Elysee statement.

“NO, Alsatians will not have to learn and speak German.”

Far-right MEP Bernard Monot, among others, had charged that the eastern French regions, which have changed hands several times between French and German rule, were being “handed over to a foreign power”.

And the leader of France's National Rally, Marine Le Pen, accused Macron of “an act that borders on treason” by signing the follow-up pact to the 1963 Elysee Treaty.

The French presidency said that “by trying to rekindle the ashes of a rivalry between France and Germany, those who spread the false news betray all the work of reconciliation that allows us to live in peace”.

Le Pen has also predicted that Paris will eventually give up its permanent seat on the United Nations Security Council, and even share control over its nuclear arsenal.

“NO, France will not share its seat in the UN Security Council with Germany…nor with anyone else,” said Macron's office.

In the text of the 16-page accord, Paris backs Berlin's long-running and long-shot campaign for a permanent Security Council seat — a move which also buries proposals for Paris to give up its seat in favour of a combined EU representation.

Both former enemy nations also pledge to stand shoulder to shoulder in case of a military attack against either of them, reaffirming a commitment already written into EU and NATO treaties, and to create a new joint Defence and Security Council.

Picking up the bill

Among German populists, a long-running fear is that taxpayers in the EU's top economy will have to foot the bill for the expensive visions of neighbouring members of the bloc.

A co-chief of the anti-immigration Alternative for Germany (AfD) party, Alexander Gauland, charged that Paris and Berlin were now seeking to create a “super EU” within the European Union.

“We as populists insist that one first takes care of one's own country,” said Gauland, whose opposition group started life five years ago as a eurosceptic fringe party.

“We don't want Macron to renovate his country with German money.”

Neither of the European leaders addressed the point directly, but German Chancellor Angela Merkel warned that “populism and nationalism are on the rise”, multilateralism and international cooperation are under attack, and  “more decisive, clearer and future-oriented answers are needed”.