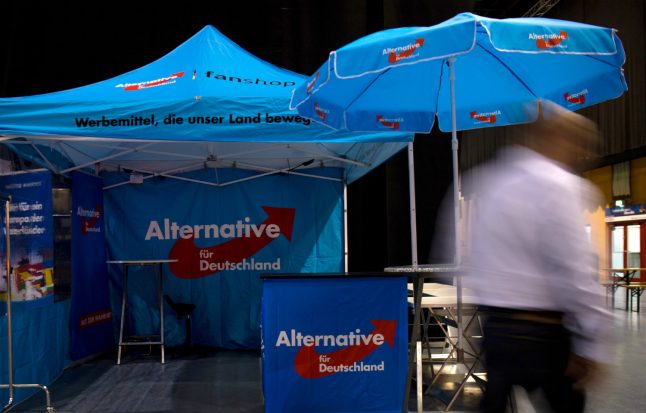 An AfD stand during a recent European election meeting hosted by the party in Riesa, Saxony. Photo: DPA

On Monday an Insa opinion poll by Bild newspaper showed the anti-immigration AfD at 13 percent – a drop of 1.5 percentage points – the party’s worst figure for about a year, and fourth place in the current party ranking.

The survey results came after Germany’s Office for the Protection of the Constitution (BfV) last week declared that it had officially designated the AfD a “review case”, meaning it will step up monitoring of political extremism within the group.

The winners of the poll, which asks a sample of voters who they would vote for if an election was held this week, were the centre-right Christian Democratic Union and its Bavarian sister party the Christian Socialists (CDU/CSU).

The CDU/CSU gained two points bringing them to 31 percent. The Greens remain the second strongest force with 19.5 percent (+1.5 points), followed by the centre-left Social Democrats (SPD), who were placed at 13.5 percent, just ahead of the AfD.

SEE ALSO: In depth: Is the AfD becoming too extreme?

According to the Bild survey, the pro-business Free Democrats (FDP) remain at 9.5 percent. After a slight drop, the Left Party (Die Linke) is now also at 9.5 percent.

The current poll shows two government coalitions would be possible: an alliance between the CDU/CSU and the Greens, which would account for a total of 50.5 percent of voters. With a total of 54 percent, a coalition between CDU/CSU, SPD and FDP would also be possible.

Germany’s intelligence agency shied away from immediate full surveillance of the entire AfD, including phone and email taps, the use of undercover informants and the collection of personal data on MPs.

But it was also to start full surveillance of the party's youth organization Junge Alternative (JA), which is suspected of having ties with the extremist Identitarian Movement.

And it was to place under surveillance the AfD's most far-right grouping “The Wing” (Der Flügel), led by nationalist Björn Höcke, reported the Tagesspiegel last week.

SEE ALSO: Germany's intelligence agency to step up surveillance of the AfD

gewinnen/erreichen – to gain or increase