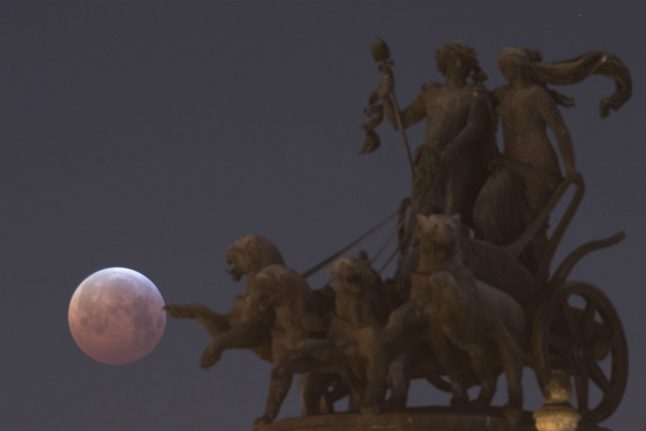 The full moon behind the Panther Quadriga at the Semper Opera in Dresden. Photo: DPA

“Today we even have a very bright eclipse”, said Susanne Hüttemeister, the director of the planetarium in Bochum, about the Mondfindsternis, a total solar eclipse which is often abbreviated as Mofi in German.

SEE ALSO: Mofis and moonlight: Your guide to the total solar eclipse in Germany The blood moon seen from the top of Cologne's famous cathedral. Photo: DPA

Robert Hausen of the German Weather Service (DWD) said that the lunar eclipse was especially visible in the middle of Germany. However, particularly in the north and in the foothills of the Alps, the clouds obscured lunar fans’ views.

Such a lunar eclipse can come only with full moon, when the sun, earth and moon lie exactly in one line. An eerie blood moon seen over the dome of the St. Elisabeth Church in Nuremberg. Photo: DPA

“The moon's orbit is inclined against the earth's orbit,” explained Hüttemeister. “Therefore the moon normally runs south or north past the earth's shadow. Today it hits it exactly.”

The moon appears reddish because red light is scattered into the shadows by the Earth's atmosphere. The view over a weather hen in Laatzen, Lower Saxony. Photo: DPA

“Therefore we also hear the somewhat unsightly term blood moon, which you read everywhere. It was actually invented however by an American doomsday cult and is not at all historical,” said Hüttemeister.

Police in Hameln, located in Lower Saxony, also took a photo of the red moon and tweeted: “Moon broken? Don't worry. The moon is fine. So no reason to call the #Police. The Earth satellite put on a new robe this morning. The next night he'll look the way we know him.”

When asked, the police responded with a winking emoji that no one had called on their services.

The spectacle began around 4:34 a.m. when the full moon slowly moved into the shadow of the earth. At about 5:41 a.m. the moon had completely disappeared – and  the total lunar eclipse began. From 6:44 a.m. on the moon moved again slowly out of the core shadow. An eerie blood moon seen over the dome of the St. Elisabeth Church in Nuremberg. Photo: DPA

Since the moon is straight on a particularly earth-near section of its in approximately elliptical orbit, it appears particularly large.

If you missed the copper red moon, you have to be patient: Two really good lunar eclipses will be viewed in Germany on New Year's Eve 2028 and in the night from December 21-22, 2029, writes the German Aerospace Center.