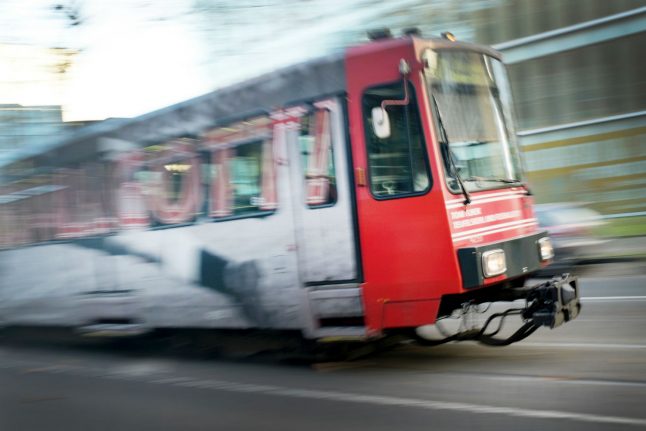 The Rheinbahn street train going down a Düsseldorf street.

On Monday evening, Bejan Yakin – who has Afghani roots – entered a train at the main station in Düsseldorf, where he is a student. An older woman sat near him and immediately verbally attacked him, calling him a rapist, stalker and misogynistic Arab, he reported to RP Online on Wednesday.

“I ignored her,” Yakin told the newspaper. But when a dark-skinned girl entered the train a few stations later and also became the target of the verbal assault, he asked the woman to stop, Yakin said. Several passengers came to his aid, but the senior woman continued to scold the two, he reports.

When the train driver, alerted by passengers, came to the scene, she first suspected the girl of being the troublemaker, Yakin reports. He tried to intervene, but the train driver, “interrupted me,” he wrote on a post detailing the incident on Facebook.

“I told her to move the lady – after all she was the one who insulted everyone,” says Yakin. Although the senior once again continued to insult him and the girl nearby, the driver asked the scolding woman if Yakin could stay – and in the meantime asked him to sit somewhere else.

“I told her I thought it was highly racist,” Yakin said. The driver's behavior “hit him much harder than the insults of the possibly mentally confused woman,” he says.

Rheinbahn spokesperson Georg Schumacher, however, saw no reason to object to the driver's behaviour: “The driver took care of herself, called the police and tried to address the only person apparently approachable in the situation,” he told RP Online. “But he rejected her attempt to de-escalate.”

While Schumacher could understand that Yakin was certainly upset, he rejects the accusation of racism. “The Rheinbahn is a colourful company. There is no room for racism here.”

The incident has already sparked a political response. Rheinbahn supervisory board member Martin Volkenrath (SPD) said he is “shocked and angry, not least because the Rheinbahn fights racism intensively”.

Volkenrath wants to make the case an issue for the supervisory board, he added.