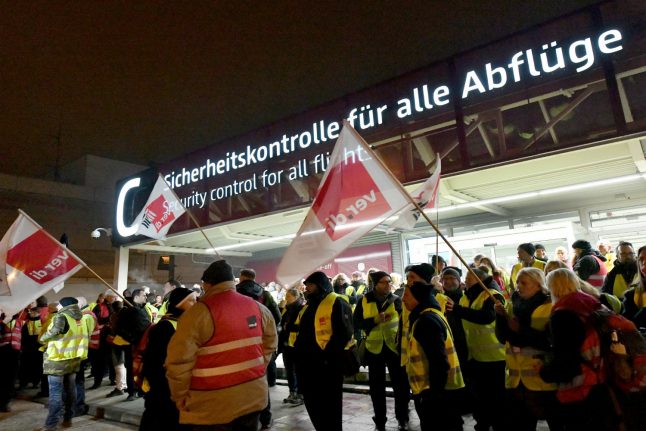 Security staff at Frankfurt airport – Germany's largest – as well as Hamburg, Munich, Hanover, Bremen, Leipzig/Halle, Dresden and Erfurt airports are to down their tools in a series of coordinated industrial action, according to the Verdi union.

The union had already announced on Friday that security workers at Frankfurt would walk out from 2am until 8pm, but it had warned that more airports could join.

On Monday Frankfurt airport operator Fraport announced that airlines have already cancelled about 470 flights on Tuesday, meaning every third flight will be axed.

Seven other airports across Germany will also be affected to varying degrees. According to the airport association ADV, at least 220,000 passengers will be hit by the planned action, reported DPA.

It marks another escalation in the union's standoff with employers after walkouts by security personnel at airports in Berlin, Cologne-Bonn, Düsseldorf and Stuttgart last week led to more than 800 flights being scrapped, affecting over 100,000 passengers.

Verdi and the trade union DBB Beamtenbund and Tarifunion are negotiating with bosses to improve the wages and working conditions of the 23,000 aviation security employees at German airports. Verdi is pushing for a pay increase to €20 per hour for all of these employees.

Wages currently vary nationwide, with workers in some airports in eastern Germany earning around €14 hourly, compared with just over €17 for their peers in the capital and western parts of the country.

Employers' association BDLS meanwhile is offering increases of between two and 6.4 percent.

The next round of negotiations are due to take place on January 23rd.

Verdi's negotiator Benjamin Roscher said employers had not yet submitted a satisfactory offer.

The union's board member Ute Kittel added on Monday: “We are ready to negotiate and conclude with a good offer”.

Meanwhile, Frankfurt airport is preparing for the strike by assembling a special care team. According to a spokesman for the airport operator Fraport, a group of employees will take care of passengers who cannot board their plane as planned.

This will include the provision of food, blankets and camp beds. The strike could largely paralyze the airport in Frankfurt, reported DPA.

“Even if we are well prepared, we recommend that travellers do not come to the airport during the strike,” the spokesman said. It would be better if people asked the airlines about rebooking or other alternatives.

Passengers who stop over in Frankfurt and have already come through security will not be affected if they remain in the departure lounge area. That makes up about 60 percent of passengers, said the Fraport spokesman.