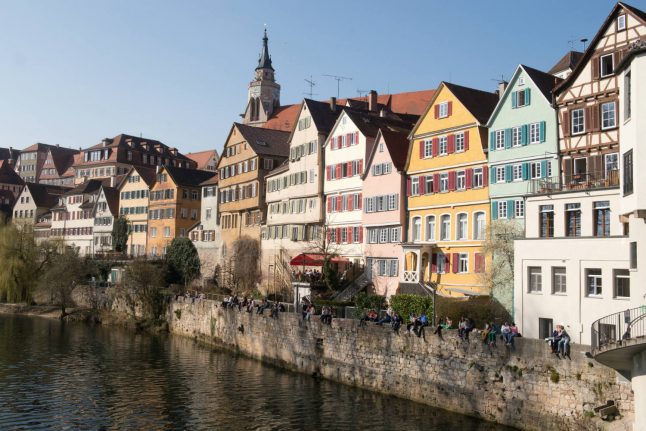 Half-timbered houses sit along the Neckar in Tübingen. Photo: DPA

The mayor of Tübingen, a small student-driven city, caused a social media stir in November when he declared that he is “leaving the functioning part of Germany” when he visits Berlin.

While I’ve grown fond of the far-from-perfect German capital in my six years living here, I can see how the Green Party mayor Boris Palmer might feel that way – especially when I think back to my long weekend trips to his charming city.

Stepping back in time in Tübingen

I first visited the city in Baden-Württemberg in fall 2013, after only a few months of living in Berlin. I was eager to pay a visit to a more idyllic part of Germany – the type with picture-perfect cobblestone streets, hilltop churches and castles and a colourful Altstadt.

Avidly walking around Tübingen after a nearly 8-hour bus ride from Berlin, I saw I had chosen the right city. The founding of the city of over 85,000 residents dates back to 1048, and it’s been preserved – only one-bomb fell on it in World War II.

The Altstadt, situated along the Neckar river, felt like stepping back in time to the 17th century, with crooked, cobblestone streets winding past pretty half-timbered houses. A Friday street market sold a versatile array of used books, not surprising for a city where one-third of the population is students.

I headed up nearby winding stairs to the Schloss Hohentübingen, the city’s impressive castle whose Medieval courtyard and garden spans impressive views of the city. Views from the top of the Schloss Hohentübingen. Photo: DPA

Eating your heart out in Tübingen

Situated in the heart of Swabia, Tübingen boosts an impressive cuisine from the region, what I still like to think of as the true German comfort food.

Popular with students and longtime locals alike, the Neckarmüller serves up savoury Swabian specialties such as Zwiebelkuchen and Maultaschen, or usually meat-filled ravioli. But this being a student city where 40 percent of the population votes for the Green Party, it’s not shocking to also find a vegan variant of the dish on the menu. Doubling up as a beer garden – with a sprawling patio overlooking the Neckar in winter months – the restaurant also serves regionally-brewed beer from nearby Mössingen, of course served up with a big Bretzel.

Being a student city, it’s possible to find a variety of hearty cuisine for reasonable prices – from the burritos of “El Chico” to the classic Döner and pizza of Aksaray 3. Night owls, take note, though: a restaurant called Stern serves up tasty Italian specialties until its kitchen closes at midnight, and then doubles up as a dive bar. Unfortunately I didn’t receive a discount when eating there.

I initially chose to visit Tübingen by chance: a friend was studying theology there. I soon saw that this city is an ideal place to contemplate religious philosophy – not just for its organized and scholarly quietude that seems to permeate it during the day (being a student city there’s still an active nightlife), but also for its deep religious roots.

A central city landmark is the Stiftskirche, which became part of Martin Luther’s protestant church, and has features of Roman Catholicism, such as patron saints. Next to the remarkable Rathaus (town hall) is also the Judengasse, or the residential street where Tübingen’s Jewish community lived until they were expelled in 1477 – a plaque there commemorates their fate. The university, which is one of the largest in Germany with over 20,000 students, has also hosted many intellectual greats. Joseph Alois Ratzinger (aka Pope Benedict XVI) held a chair in dogmatic theology there.  Georg Wilhelm Friedrich Hegel, Friedrich Schelling, David Friedrich Strauss, and Johannes Kepler were all students there.

There are lots of memorials devoted to the city’s many intellectuals throughout history. A parodied sign on Goethe's old dormitory stands out from your typical German memorial plaque. “Hier kotzte Goethe” it reads, or “Goethe puked here” – one reads, commemorating the visit of the author in the late 18th century

Tübingen was also one of the core cities for the worldwide student-led protests of 1968, and has been shaped by Green and left-leaning views ever since. It’s also literally a very green city: on Saturday, I recommend hopping on one of the free buses – or cycling to – the nearby Schönbuch nature reserve.

After my years of living in Berlin, I’ve grown fond of both its vivacity and its vastness, despite its problems. While gentrification changes many neighbourhoods, there is still a certain disarray and disorder I haven’t seen in the rest of the country – and certainly not in comparatively tiny Tübingen.

I wouldn’t trade Berlin for Tübingen, but could benefit from a few days every now and then to rejuvenate in a slightly slower and more scholarly pace of life, at least for a short window of time.