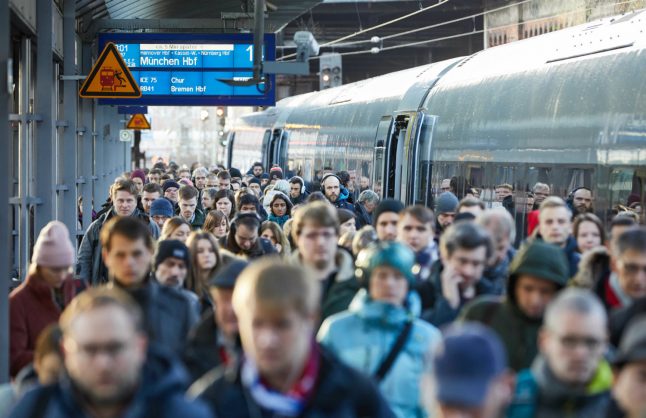 Passengers in Hamburg during a strike by railway workers last month. Photo: DPA

Top-up pay for working nights, Sundays and public holidays will also be increased next year.

The deal with GDL follows on the heels of a similar bargain Deutsche Bahn struck in December with the EVG union, which represents most of its 160,000 workers.

On top of the pay deal, the train drivers also secured the right to disconnect while not at work, with no duty to check emails or be reachable by phone outside work or on-call hours.

The two pay deals run until February 2021, providing Deutsche Bahn with protection against a repeat of the months-long disruption that has marked past pay disputes.

Rail bosses can now focus fully on their central challenge of increasing service quality and improving their punctuality record, a perennial subject of grumbling among German commuters.

It came after strike action by railway workers caused chaos on Germany's public transport network last month. The industrial action came after talks had broken down between Deutsche Bahn and the EVG railworkers' union.

High speed ICE trains were cancelled throughout the country due to the four-hour strike which began at 5am on December 10th. Regional services were also affected, while the S-Bahn network was also hit by the strike.

It caused problems for buses and the U-Bahn network too as commuters and other passengers flocked to other forms of transport to get to their destination.

The union and rail bosses struck a deal a few days after the industrial action.