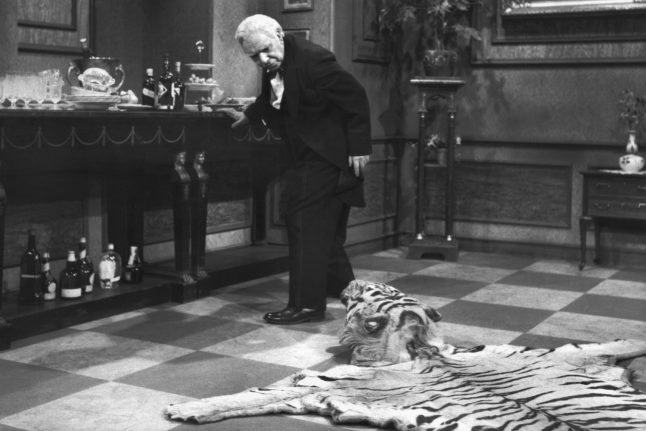 When Mike Frinton meets a German, he usually surprises them by saying: ‘You know my dad.'

That statement is first met with puzzled looks, but when Frinton explains who his dad is, almost every German knows what he’s talking about.

“When any of the family meet a German and the moment’s right we’ll say: ‘You know our dad,'”  Frinton told The Local. “In the right situation it’s a great ice breaker. Of course they look at you sideways at first. But when you talk to them and say: ‘My dad’s Freddie Frinton,' they know who he is.”

Frinton senior is star of Dinner for One, also known as The 90th Birthday (Der 90. Geburtstag), which can only be described as a national treasure in the Bundesrepublik.

The comedian, who was born in Grimsby, England, in 1909, has wonderful comic timing in the slapstick performance that’s dominated New Year’s Eve in Germany since it was broadcast in 1972 in its now annual Silvester slot.

Although it's also traditional festive viewing in Denmark, Sweden, Norway and some other European countries, it is particularly loved by generations of Germans, many of whom can quote it word for word. It's virtually unknown in Britain.

Frinton, 64, says he likes to talk about the sketch whenever he bumps into a German, wherever he is in the world.

“It almost always gets people chatting,” says Frinton, who’s the youngest of four children from his father’s second marriage.

“Most of the time people are so nice about my dad and Dinner for One,” he adds. “They say lovely things about it, they talk about their stories behind it, how they watch it, when they watch it, who they watch it with. It’s a great conversation starter.”

SEE ALSO: 50 years of a New Year's Dinner for One

'Same procedure as every year'

Filmed in black and white, it stars Frinton as James, an elderly butler serving May Warden’s upper-class Miss Sophie on her 90th birthday.  Miss Sophie has invited her four closest friends for a celebratory dinner, but there’s one problem –  her friends are already dead.

James saves the day by taking their place, stumbling around the dinner table, adopting their voices and personas and making toasts on their behalf, knocking back glasses of wine, sherry and champagne in the process.

It was originally written by playwright Lauri Wylie in the 1920s and Frinton is thought to have first performed it in 1945. He paid Wylie a royalty to stage it until Wylie’s death, before securing the rights to the sketch himself – a fateful decision.

When German entertainer Peter Frankenfeld and director Heinze Dunkhase caught Frinton’s performance in Blackpool, Dinner for One was then staged as part of Frankenfeld’s live show, before being filmed in front of a live audience by Norddeutscher Rundfunk (NDR) in 1963.

It was screened occasionally but only became widely known on the continent when it was given a New Year’s slot.

The Frinton family had no idea it was so loved in mainland Europe until the late 1970s. There were royalties from the showings that were kept aside for Frinton's mum, Nora.

“She’d remarried by that point so somebody said they had trouble tracking her down,” says Frinton.

Frinton says the family were taken aback by the popularity and thought it “very nice” that his dad’s work was so well thought of.

“We’re ever so proud of the fact that it’s remembered and we are all really glad that NDR did the recording.”

A different story in Germany

The 18-minute sketch only had its UK premiere in November this year, when it was shown twice as part of the Scottish Comedy Film Festival in Campbeltown, which Frinton attended.

Perhaps that’s why Frinton senior, although a music hall and TV comedy star back in the day, is not widely known in the UK.

It’s a different story in Germany.

In fact a museum devoted to Frinton will be opening soon in the German fishing town of Bremerhaven.

“They're renovating it as we speak,” says Mike Frinton.

Frinton and Warden as James and Miss Sophie have also appeared on postage stamps in Germany, another indication of how much of a cultural phenomenon Dinner for One is.

“We were almost as proud of that as anything else,” says Frinton. “That’s a real honour. There aren’t too many people who get their faces on a stamp, no matter which country you’re from, so to have it done in another country, it’s great.”

So why is this obscure British comedy sketch such a hit in Germany?

“I think because they associate it with New Year and that’s always an emotional time when you’re getting together with family,” says Frinton. “You see people you may not see again or people you haven’t seen in a long time.

“Generations have grown up with it now so it’s part of their childhood.” Freddie Frinton and May Warden as James and Miss Sophie in Dinner for One. Photo: Annmarie Aldag/NDR/DPA

Frinton describes his dad as a hard worker who performed up and down music halls across the UK, but always tried to travel back on a Saturday night so he could enjoy breakfast with his family on Sunday.

“He wasn't a man for staying after shows and drinking with the crowd,” says Frinton. “I think he just wanted to get back to be with his family.”

Although a born entertainer who was reportedly sacked from his job as a fish filleter at the Grimsby docks for making his colleagues laugh too much, around the house he was more of a “quiet man, a bit old fashioned”, says Frinton.

And contrary to reports that Frinton senior was teetotal, his son says he “did like the odd drink but he wasn’t a drinker”.

He enjoyed a gin and tonic, a glass of wine or whisky every now and then.

Freddie Frinton was always worried the work was going to dry up so he did as much as he could to get the hours in and provide for his family.

It was worrying for Frinton when theatres started closing down in the late fifties – they were being “turned into bingo halls or carpet warehouses,” says Mike Frinton.

But work started picking up again and Frinton senior got his television break on the Arthur Haynes Show in the early 60s. He also joined the cast of the sitcom Meet the Wife.

“All of a sudden Dad had this second career as a TV personality,” says Frinton.

A legacy that lives on

Freddie Frinton died suddenly of a heart attack in 1968 at the age of 59. Yet his legacy lives on.

Frinton says his dad's repertoire involved a lot of things – but the Dinner for One sketch was “the thing he loved doing most of all”.

He says that NDR “recorded it beautifully” and the family is thankful that care was taken to produce such an enduring piece of comedy, that’s earned legendary status.

And what would Freddie Frinton think of the sketch – and his popularity in Germany and other parts of Europe?

He adds: “I think he thought it was a nice thing to do and was pleased that somebody wanted to put it on film but he would be amazed by the attention it gets now, absolutely.

“The Germans and their fanaticism (for the sketch); they've kept it alive.”